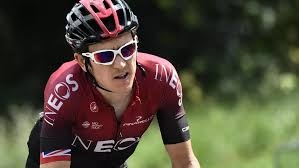 Former Tour de France champion Geraint Thomas has raised £300,000 ($375,299, 345,288 euros) for Britain’s National Health Service after a 36-hour indoor cycling stint. The Welshman rode a trio of 12-hour rides over three days on a turbo bike in the garage of his home in Cardiff in a bid to raise funds to tackle the coronavirus outbreak.

The 12-hour rides were to emulate a typical shift of an NHS worker. “No exaggeration, the last two hours were the hardest I have ever had on the bike,” Thomas told the BBC yesterday. “I could barely sit down,” the 2018 Tour de France champion added. Professional cycling, in common with all major sport worldwide, has been suspended following the spread of the virus, with this year’s Tour de France delayed from June and July until August and September.

The suspension of the road race calendar prompted Thomas to set himself a challenge which he likened to completing eight or nine stages of the Tour itself. “It has been solid,” said Thomas, winner of the 2018 British sports personality of the year award. “I am going to have a week off to recover from this. It was 36 hours in the saddle over three days which would normally be a big training week for me. “The longest ride I have done on the road is eight hours and 20 minutes in a group and that was with a coffee stop. “On a turbo the longest was three hours and there is a lot of difference from that and riding outside where you have the scenery and downhill.”

The 33-year-old, a two-time Olympic pursuit gold medallist, added there were particularly personal as well as general fundraising reasons for his effort of endurance. “My mum’s gone back to work at Velindre cancer hospital in Cardiff -- she’s retired three times already and my best mate’s a GP (doctor) up St Helens way as well,” said Thomas. “I’ve heard so many stories about what people are doing and it made me just want to try and play a tiny, tiny part by trying to help out in a small way.”

Thomas lags a long way in funds raised behind a 99-yearold former soldier, Captain Tom Moore, who has become a national hero by raising over 20 million pounds by walking 100 laps of his garden.