Nasser bin Hamad: Our sport is open to the world and we are seeking to build a competitive football system | THE DAILY TRIBUNE | KINGDOM OF BAHRAIN 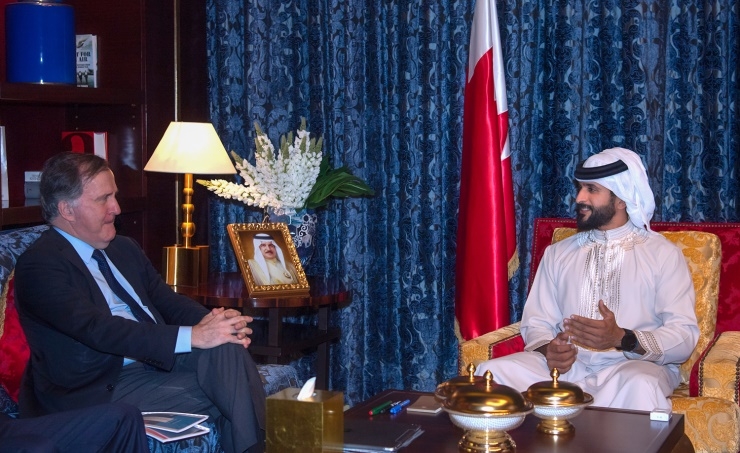 Nasser bin Hamad: Our sport is open to the world and we are seeking to build a competitive football system

March 09 (BNA) His Highness Sheikh Nasser bin Hamad Al Khalifa, Representative of His Majesty the King for Charity and Youth Affairs, National Security Adviser and Chairman of the Supreme Council for Youth and Sports, stressed that Bahraini sports are more open to their counterparts from international countries and always strive to achieve the highest levels Development in its various administrative and technical systems by benefiting from the successful experiences that enable Bahrain sport to move forward in its development process, stressing that His Highness the Kingdom of Bahrain has become giving the sport double importance as it represents an important part that contributes to supporting the national economy by organizing and hosting ducks Walt and sporting events and the trend towards sports and leisure sports.

This came during the reception of His Highness Sheikh Nasser bin Hamad Al Khalifa to Mr. Frasi, Advisor to the French President for Social and Economic Affairs, who is considered one of the prominent and successful personalities in the football industry in the French capital, Paris, in the presence of His Excellency Mr. Ayman bin Tawfiq al-Muayyad, Minister of Youth and Sports Affairs.

His Highness Sheikh Nasser bin Hamad Al Khalifa noted during the meeting what ties the two friendly countries in close relations in various fields, including the youth and sports fields, which is witnessing an upward development between the two countries. And contribute to the development of the sports sector.

His Highness Sheikh Nasser bin Hamad Al Khalifa pointed out the importance of Mr. Frasi's visit to the Kingdom of Bahrain in laying solid foundations for constructive cooperation between the two friendly countries through exchanging experiences and visits in sports fields including football, stressing His Highness the Kingdom of Bahrain’s keenness to open more channels of communication and cooperation with France in various sports fields as it carries a pioneering experience in this field and leans on a clear history, especially that it managed to achieve many achievements, including crowning the World Cup twice.

During the meeting, His Highness Sheikh Nasser bin Hamad Al Khalifa discussed with Mr. Frassi the joint cooperation in the fields of developing Bahraini football and its industry and how to upgrade its administrative and technical system in addition to discovering more sports talents and working to refine them in the right way.

Also, during the meeting, they touched on the football industry and industry Sport and its direct impact on the development of sport and its contribution to the national economy, as France has a successful experience in this field.

Coming to the Kingdom of Bahrain to benefit from this pioneering experience, which has achieved a distinguished appearance for French clubs and teams in various championships