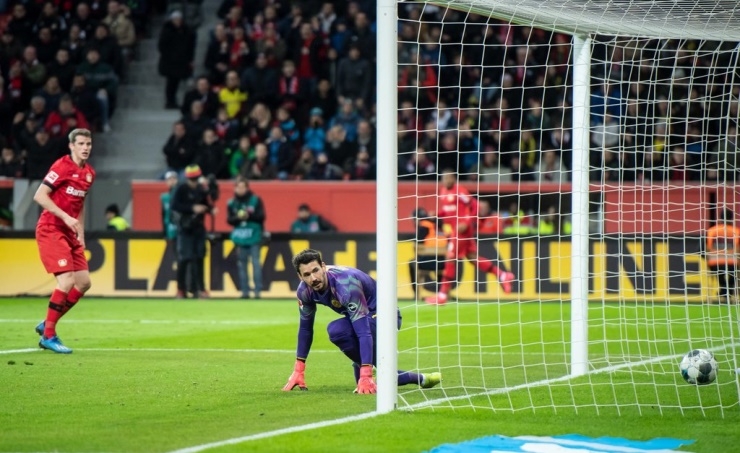 Borussia Dortmund threw away the lead with 10 minutes to go to lose 4-3 at Bayer Leverkusen on Saturday, missing the chance to go level on points with Bundesliga leaders Bayern Munich.

In a thrilling encounter, Leon Bailey and Lars Bender scored just a minute apart to send Leverkusen up to fifth and reignite their hopes of a Champions League berth, which is now just two points away. Dortmund stay third in a jam-packed top six, Deutsche press agency (dpa) reported.

Emre Can netted a stunner on his first start for Dortmund since moving on loan from Juventus but fellow January capture Erling Braut Haaland failed to score for the first time in a Dortmund shirt.

"We conceded goals too easily," Can told Sky. "I have only been here a week but we have to learn. Tonight was a game which summed up Borussia Dortmund."

Champions Bayern host second-placed RB Leipzig on Sunday after Borussia Moenchengladbach, three points behind Bayern in fourth, face derby rivals Cologne. Gladbach said there was a risk their game would be called off early on Sunday because of a forecast storm.

Werder Bremen's miserable league form continued with a 2-0 home defeat by Union Berlin which sent them into the automatic drop zone.

Marius Buelter's double sealed a seventh defeat in eight league games for Bremen and meant Fortuna Dusseldorf crawled up to the relegation play-off spot with a 1-1 draw at 10-man Wolfsburg.

Sixth-placed Schalke wasted the chance to substantially close the gap to the Champions League places with a 1-1 draw at home to bottom side Paderborn. They are two behind Leverkusen and trail Gladbach by four points.

Germany's Can started for Dortmund alongside Haaland, who was only a substitute in the midweek German Cup last 16 defeat by Bremen.

The Norwegian, who had scored eight goals in four games since his arrival from Salzburg, spurned two good early opportunities and Leverkusen soon took advantage.

Former Leverkusen midfielder Can then stepped up out of the blue to send an unstoppable shot from 25 metres into the top corner on 33 minutes. But the goals kept flowing and Volland swept in his second before half-time via a deflection.

Both sides hit the post and had goals chalked off for offside before Raphael Guerreiro thought he had won it for visitors Dortmund on 65 minutes following a fine move.

But the ball fell kindly for substitute Bailey to net the leveller on 81 minutes and a towering header from Bender completed the dramatic turnaround.

In Bremen, Buelter gave Union the lead on the counter-attack seven minutes after the restart. It got worse for the home fans when Buelter grabbed his second when his shot crossed the line before being cleared.

The hosts had chances but they consistently look anaemic in front of goal and slipped to second-from-bottom on goal difference. Tuesday's 3-2 Cup success over Dortmund was a rare moment of cheer.

Bremen coach Florian Kohfeldt has been given consistent backing by the board but is now under huge pressure.

"We wanted to create a fiery atmosphere but we didn't and that is the main problem at the moment. We are in a dramatic situation."

Hertha coach Juergen Klinsmann kept Jordan Torunarigha in his starting line-up after the defender said he was ready to play following his accusation that he was racially abused by Schalke fans during the 3-2 German Cup last 16 defeat on Tuesday.

He could do nothing to stop Mainz striker Quaison's three goals.

Frankfurt thumped fellow mid-table side Augsburg 5-0 at home on Friday.