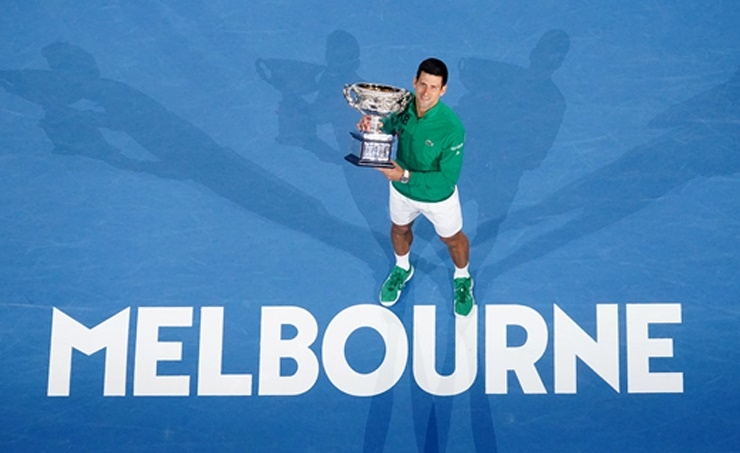 Second seed Djokovic got the deciding break for 2-1 in the final set and, after saving break points in the following game, completed his comeback victory on first match point after four hours of play.

Fifth seed Thiem and Djokovic traded shot for shot – and double fault for double fault – in the first three hours of the contest.

After being gifted the first set with a Thiem double fault, Djokovic faltered late in the second, losing six consecutive games during which he dropped the set and decisively fell behind in the third.

The Serbian then stepped off the court for five minutes - in what appeared to be a medical time-out - and looked re-energized again mid-fourth, when he pressed Thiem into three mistakes, taking a 5-3 lead and eventually forcing the deciding set where he denied Thiem a first grand slam title in his third final.

"Congratulations to Dominic for an amazing tournament," Djokovic said after the win.

"It wasn't meant to be tonight, tough luck, it was a tough match but you were very close to win it and you definitely have a lot more time in your career and I am sure that you will get one of the Grand Slam trophies and more, more than one."

Djokovic stretched his flawless finals record at Melbourne Park to 8-0 to seize the Norman Brookes Challenge Cup for a eighth time since winning his first slam title there in 2008.

The 32-year-old, who has become the first man in the Open Era to win Grand Slams in three different decades, with the win will overtake Rafael Nadal to regain the number one spot in the rankings.

The win also extends the string of the "big three" - as Djokovic, Nadal and Roger Federer are known - to 13 consecutive majors.

The illustrious trio shares between them 56 titles from 68 grand slams contested starting with Federer's first Wimbledon title 2003. In the period there have been only five finals without anyone of them.

"Huge congrats to Novak, amazing achievement," Thiem said after the defeat, his third at a slam final after falling to Nadal at the French Open in 2018 and 2019.

"Unreal what you are doing throughout all these years, you and also two other guys, I think you brought men's tennis to a complete new level and I'm really proud and happy that I can compete in these times," the 26-year-old said.

"I fell a little bit short today but I hope that I can get soon a revenge," Thiem added.