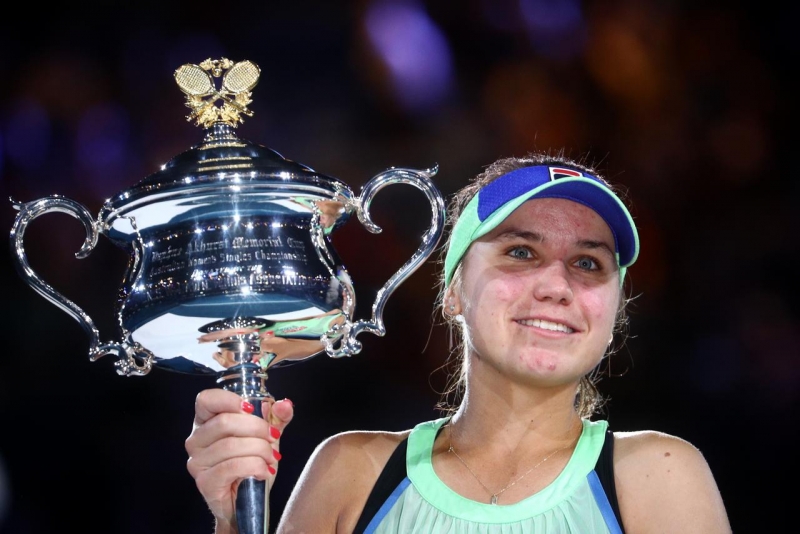 America’s Sofia Kenin stunned two-time Major champion Garbine Muguruza to win the Australian Open yesterday, completing a surprise run where she came from nowhere to lift her first Grand Slam title. Despite making her debut in a Major final Kenin, 21, showed all her trademark aggression as she fought back from a set down to win 4-6, 6-2, 6-2 in 2hrs 3mins against the shellshocked Spaniard. The 14th seed, who will now jump to seventh in the world and usurp Serena Williams as America’s number one, was in tears at the end and headed straight for her father Alexander, who is her coach.

It was the final twist in a tournament of upsets, after Williams crashed out in the third round and Kenin beat Australia’s world number one Ashleigh Barty in the semi-finals. “It’s just such an honour to have my name on that beautiful trophy, it’s something I’ve dreamed about,” said Moscow-born Kenin. “Of course it’s an exciting moment for me and for my family, I get to share this. “Obviously things are going to change for me, but we’re just going to move forward, get ready for next tournaments. “Right now we got to figure out how to celebrate.”

Former world number one Muguruza was unseeded for the first time at a Slam since 2014, having suffered a marked loss of form in the last 18 months. The 26-year-old was resurgent in Melbourne over the past fortnight, but after grabbing the first-set lead her serve failed her spectacularly. She totted up eight double-faults in all, three of them in the final game -- including one on the second championship point, handing the title to her younger opponent. Kenin fights back Muguruza drew first blood at Rod Laver Arena, where the roof was closed for rain in Melbourne, getting the first break of serve. Kenin, who ended the fairytale run of 15-year-old Coco Gauff on her way to the final, bounced her American starsand-stripes racquet on the hardcourt in anger.

The 2016 French Open and 2017 Wimbledon winner Muguruza took the first set in 52 minutes when the young American planted her forehand out. Kenin, not one to hide her feelings on court, said that she had struggled to rein in her emotions at that point. “I was obviously devastated, I knew I didn’t take my chances,” she said. “I knew I needed to somehow forget what happened, just move forward and just keep believing in myself.” The aggressive Kenin upped the ante in the second set, breaking her more experienced opponent in the fourth game and easily holding to sprint into a 4-1 lead. Kenin, who won their only previous encounter in three sets, grabbed the second set in an emphatic 32 minutes. A rattled Muguruza was seen briefly by a physio for what appeared to be a lower-back problem.

Into the deciding set and the gutsy Kenin saved three game points in a pivotal fifth game, tossing the ball back over her head by way of a defiant celebration. Kenin adds by far the biggest title of her fast-burgeoning career to the three WTA crowns she won last year. “The past two weeks have been the best of my life,” she told Rod Laver Arena, as her father -- who left the Soviet Union in 1987 to give the family a better life -- filmed her victory speech on his phone. “I love you guys from the bottom of my heart, thank you so much,” she told the crowd.