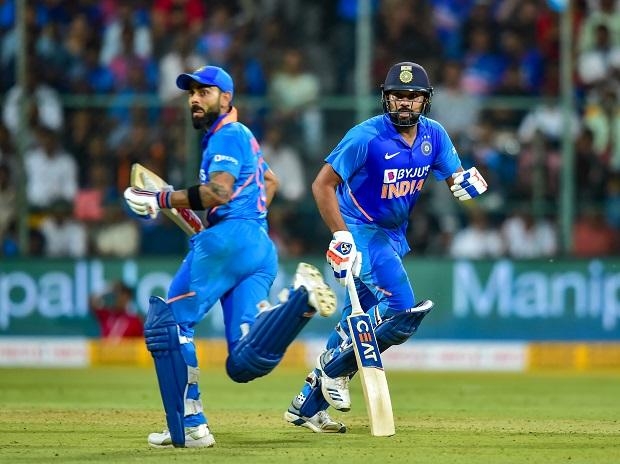 sports January 20, 2020
Opener Rohit Sharma (119) hit a confident century while skipper Virat Kohli made 89 as India humbled Australia by seven wickets in the series-deciding third One Day International (ODI) to claim the series 2-1, at M Chinnaswamy Stadium in Bengaluru Sunday.
For India, Rohit Sharma drew first blood, smashing the bowlers right from the start and cruised to his century quite comfortably.
Rohit was also named Man of the Match for his brilliant 119 that included 8 fours and 6 sixes.
Virat Kohli, too, jumped into the party with his 89 off 91 balls that included 8 fours.
Kohli relied mostly on singles but accelerated after his fifty, however, failed to connect on a Yorker delivery and missed his century.
Kohli was also given Man of the Series award.
Shreyas Iyer kept Kohli a good company and took the team home.He remained not out on 44 with 6 fours and a six in his tally.
Earlier, Australia cricket team captain Aaron Finch won the toss and elected to bat first.
The visitors didn't start well as David Warner was sent back into the pavilion early, and as the Aussies were on the course to stabilise the innings, they suffered another jolt as Finch had to depart after being runout following a mix-up with Steve Smith.
Steve Smith, however, went on to slam a century, hitting 131 in 132 balls, including 14 fours and a six.
Apart from Smith, young Marnus Labuschagne (54) and Alex Carey (35) made significant contributions to take Australia to 286/9 in 50 overs.
For India, pacer Mohammed Shami (4/63) and spin all-rounder Ravindra Jadeja (2/44) shared six wickets between them.
India made no changes in their playing 11 from the second ODI while Australia made one change, bringing in Josh Hazelwood in place of Kane Richardson.
Read More