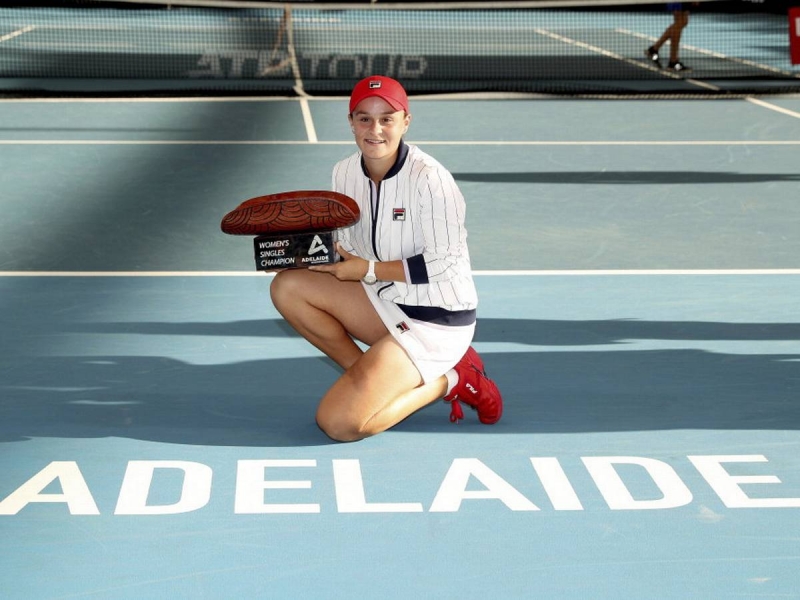 Ashleigh Barty ended a nineyear Australian home title drought on Saturday with a 6-2, 7-5 victory over Ukraine’s Dayana Yastremska at the Adelaide International.

The world number one became the first Aussie woman to lift a trophy on a home court since Jarmila Wolfe won Hobart in 2011.

Barty beat 24th-ranked teenager Yastremska in 87 minutes at Memorial Drive to gain a boatload of confidence heading into Monday’s start of the Australian Open in Melbourne, where she is top seed.

She was presented the carved wood trophy by a painted Aboriginal elder who blessed with a chant it before it was handed over.

“The best part about this week is I fought and scrapped my way through and got better and better in each situation, in each match,” Barty said.

“I just put myself in the position to play for another title, which is really exciting. It’s been incredible to play at home... I can’t wait to get started in Melbourne next week.”

Barty will take to the court at Rod Laver Arena on Monday night.

“It’s going to be exciting and a fresh tournament... I have to start with my clean slate for the Australian Open, I’m looking forward to that first round,” she said.

After starting the second set with a break, the Australian momentarily lost her edge, dropping serve for two all.

But Barty kept up the pressure, earning three break points in the 11th game. One was enough after Yastremska put a backhand wide.

The next game Barty earned three match points and took the title when her opponent sent a return long over the baseline.

In the men’s draw, Andrey Rublev set a record of his own as the Russian crushed South African qualifier Lloyd Harris 6-3, 6-0 in 57 minutes.

Rublev, who lifted the Doha trophy last weekend, is the first man since Dominik Hrbaty in 2004 to win two titles in the first two weeks of a season.

“I don’t how I’ve done this,” Rublev said of his back-to-back double. “It seems amazing to me.

“I’m so happy with who I’ve been playing these two weeks, I’ve really enjoyed my tennis a lot,” he added.

“Lloyd and I are the same age but we never played in juniors, so this was our first time.

I know how much he also wanted to win.

“I knew this match would be really tough and I’m so happy I won.”