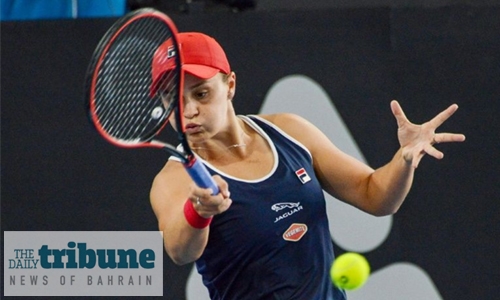 Ashleigh Barty won a rematch of last year’s French Open final Thursday as the Australian reached the semi-finals of the ATP-WTA Adelaide International.

The top seed dominated Czech tournament number eight Marketa Vondrousova 6-3, 6-3, to thrill home fans at Memorial Drive in the inaugural edition of the event. Vondrousova was playing her first tournament in six months after injuring her left wrist. Barty advanced to a Friday semi against American Danielle Collins, a 6-3, 6-1 winner over Swiss fourth seed Belinda Bencic.

She won the opening set with just one break, but was made to work in the second, saving four break points to hold on for 5-3 before putting away the win. “I feel my game is getting better and better,” Barty said. “I could have been a bit more clinical in my game, but it was good to generate opportunities for myself. Barty, who also beat Collins on the way to her Paris trophy is expecting a battle in the semi-final.

“Danielle is an exceptional ball-striker, she can take the match right out of your hands,” she said. “She plays extremely aggressive. I’ll need to put on my running shoes tomorrow.” There was a quarter-final shock for two-time Grand Slam winner Simona Halep, who heads into the Australian Open with room for improvement after being upset 6-4, 6-2 by Aryna Sabalenka.

The reigning Wimbledon champion and former world number one dropped serve five times and was flattened in the second set by her opponent from Belarus. The 71-minute rout leaves Halep standing 1-1 for the season with the first Grand Slam of the year starting on Monday in Melbourne.

Sabalenka will battle Dayana Yastremska on Friday for a place in the final after the Ukrainian 19-year-old beat a second top 20 opponent this week when she put out Croat Donna Vekic 6-4, 6-3.