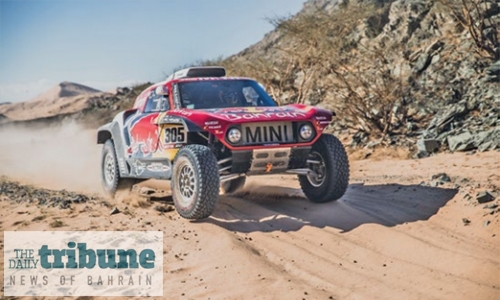 Bahrain JCW X-Raid Team made a strong start yesterday to the 2020 Dakar Rally, which is being held for the first time in Saudi Arabia. The world’s most fearsome off-road race launched with hundreds of the planet’s best drivers, navigators and riders tackling a gruelling rally-raid route like no other.

After 11 editions in South America, the race has switched to Saudi with 12 stages over 7,500km, including three super-tough stages that are longer than 750km and 75 percent of the rally taking place on sand. In attendance at yesterday’s opening of the event were Bahrain Motor Federation President Shaikh Abdulla bin Isa Al Khalifa and Bahrain International Circuit Chief Executive Shaikh Salman bin Isa Al Khalifa.

Competing in self-developed and constructed Mini John Cooper Works and Mini John Cooper Works Buggy, Bahrain JCW X-Raid Team features world champion drivers Stephane Peterhansel and Carlos Sainz and co-drivers Paulo Fiuza and Lucas Cruz. They ranked second and third amongst the competing cars after the 752km first stage, which started off in Jeddah and ended in Al Wajh yesterday. Peterhansel and Fiuza in car no.

302 completed the stage in three hours 21 minutes 18 seconds – just two minutes and 14 seconds behind the top-placed Agrorodeo team of Vaidotas Zala and Saulius Jurgelenas. Sainz and Cruz in the no. 305 car were not far behind their teammates, completing the stage just 36 seconds behind them.

“We wandered around a bit and must have lost three to five minutes looking for a hidden waypoint,” said Peterhansel. “The directions were hard to understand in English. I must be going soft in the head. “In 21 editions of the Dakar, I’ve never had a co-driver talk to me in English, so I need to get used to it. There were dunes, sandy plateaus and rocky sectors where we had to walk on eggshells.”

Sainz commented: “We got lost once and had to backtrack, which cost us some time. We also had a flat tyre. However, it wasn’t too bad after all because I was under the impression we’d lost 14 or 15 minutes. You really need to pay attention to navigation.” In today’s second stage, the racing continues on from Al Wajh to Neom, with competitors enjoying a shorter day at 401km overall. Saudi became the first country in the region to play host to the challenge, gaining the right to hold it for the next five years.

A total of 550 drivers from 62 nations are exploring the vast and formidable desert terrains of the largest country in the region. Of the event and of Bahrain’s participation, Shaikh Abdulla said: “This is as much a moment of pride for Bahrain, as it is for our region. Our participation shows Bahrain’s advances in the motorsports world, inspired no doubt by Bahrain’s pioneering move to host Formula One since 2004.

“An event of such global magnitude presented the Kingdom of Saudi Arabia with a monumental opportunity to showcase its unique natural landscape, as well as its keenness and enthusiasm to bring global sporting events to the country and the region.”

The Dakar Rally, an annual event which was first launched in Paris 1979, ran from Europe to the Senegalese city it is named after for decades, then moved to South America in 2009, where it remained until this year’s event.