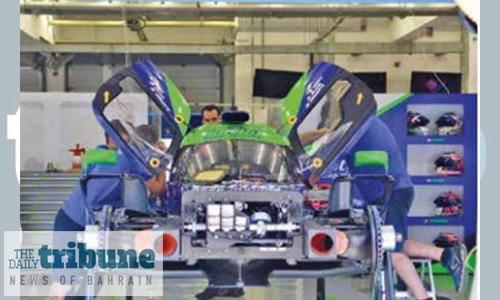 An impressive field of more than 100 drivers from all over the world will be suiting up to race as part of this weekend’s events in the FIA WEC Bapco 8 Hours of Bahrain at Bahrain International Circuit (BIC) in Sakhir. The endurance racing spectacle will be taking to the track along with a pair of supporting championships in the MRF Challenge and the Porsche Sprint Challenge Middle East.

From the field of over 100 drivers, more than 80 will be competing in the 8 Hours of Bahrain, while another 11 will be racing in the MRF Challenge and 13 in the Porsche Sprint Challenge. Several high-profile names are in the fray, including ex-Formula 1 drivers and WEC standouts Sebastien Buemi, Kazuki Nakajima, Brendon Hartley, Kamui Kobayashi, Bruno Senna, Giedo Van Der Garde, Jean-Eric Vergne, Anthony Davidson and Giancarlo Fisichella, to name a few.

Meanwhile, David Schumacher, nephew of seven-time Formula 1 World champion Michael Schumacher and son of ex-Formula 1 driver Ralf Schumacher, will also be competing as a part of the roster of MRF challengers. The weekend’s motor racing action will be open to the public on Friday and Saturday, all as part of the BIC National Day Festival to be held for four straight days from Friday to Monday. All are welcome to attend.

Tickets are just BD1 per person per day. They can be purchased at the gate, online at BIC’s official website www.bahraingp.com, by calling the BIC Hotline on +973- 17450000, or at the BIC stand in City Centre Bahrain. In the WEC, the field will be competing in four categories, including the LMP1, LMP2, LMGTE Pro and LMGTE Am classes. They are contesting the fourth round of their eight-meeting season.

There are five cars in the toptier LMP1 category, nine in the LMP2, six in the LMGTE Prio and 11 in the LMGTE Am. Three drivers each are sharing the duties in each of the cars in the LMP1, LMP2 and LMGTE Am divisions; but there will only be two drivers in each car in the LMGTE Pro class. Toyota Gazoo Racing and their pair of TS050 Hybrid cars are set to be favourites heading into the Bapco 8 Hours of Bahrain.

They have enjoyed plenty of success in past seasons at BIC, but they will face stiff competition from Rebellion Racing and Team LNT in the LMP1 class. There will also be plenty of tight-knit racing in LMP2 with the field of Gibson-powered Oreca, Aurus, Alpine and Dallara challengers, while in both LMGTE categories, Ferrari, Porsche and Aston Martin will be battling it out for supremacy.

In the MRF Challenge, Michelangelo Amendola of Belgium will be one of the main names to look out for. He will be hoping to continue his success from the season-opening round last month in Dubai, where he won three of the five races. Australian Dylan Young and Indian-American Yuven Sundaramoorthy clinched the other two sprints, and they will once again look to be fighting for victories.

The rest of field in this single-seater series is completed by Schumacher, Josh Mason of Great Britain, Reece Ushijima of Japan, Manaf Hijjawi of Jordan, Chetan Korada of India, Bent Viscaal of the Netherlands and Largim Ali and Valdemar Eriksen of Denmark. Meanwhile, the Porsche Sprint Challenge Middle East will see 13 drivers aim to make a positive start to their 2019/2020 season.

They are coming from various countries and they will be competing in three categories. The Pro class includes Berkay Beler of Turkey, Julian Hanses of Germany, JB Simmenauer of France, Saul Hack of South Africa and the German pair of Leon Koehler and Richard Wagner.

The ProAm category features five drivers, namely Jesse Van Kuijk and Daan Va Kuijk from the Netherlands, Philipp Sager of Austria, Christoffer Bergstroem of Sweden and Bahrain’s very own Shaikh Ali Al Khalifa. The Am class will be contested between Jean-Marc Cordier of Switzerland and Shaikh Jaber Al Khalifa.

Officials, team members and drivers participating in the FIA WEC 8 Hours of Bahrain weekend continued to arrive in Bahrain Wednesday. The set-up work at BIC is virtually complete as the racing is scheduled to kick off Thursday behind closed doors.

The WEC will be holding a pair of 90-minute practice sessions, the first starting at 2pm and the next at 6.30pm. MRF will also have two practices, while the Porsche Sprint Challenge will hold one practice and its first of two qualifying sessions.

BIC announced today the timings of its off-track entertainment, held as part of the BIC National Day celebrations from Friday to Monday. All the attractions can be enjoyed at BIC’s vending area, located behind the Main Grandstand.

The headlining nightly concerts featuring Balqees on Friday, Mohammed Al Salem on Saturday, Essa Al Marzooq on Sunday and Abdullah Al Rowaished on Monday will each begin at 8.30pm. They will be held on the main stage of the BIC’s vending area.