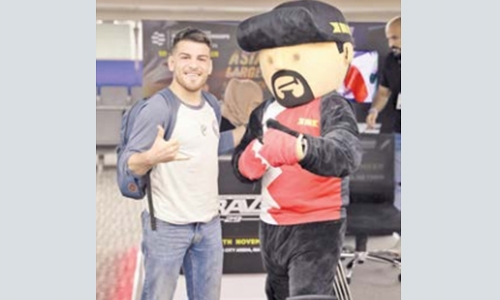 Torres arrives in Bahrain ready to make history at Brave 29

Flyweight world title contender Jose Torres has reached the Kingdom of Bahrain ready to become the promotion’s first-ever champion at 125lbs. The American fighter decided to come earlier to get used to the time difference and was greeted by the BRAVE International Combat Week crew and the mascots that will entertain the biggest fight week in the history of Asia.

Torres will take on Marcel Adur from Brazil for the inaugural Flyweight title on November 15th at BRAVE CF 29 and said he had a tough week ahead of him as he readies to juggle fight week commitments to his weight-cut. But he also said he was looking forward to making history for himself, his family and the KHK MMA team which he has represented since before becoming a professional fighter.

“Shorty” also made a point of praising his opponent’s style, highlighting that Adur was a different kind of fighter that he was used to fighting, but is confident in his preparations for the showdown. “Adur is a long, lanky striker type of fighter. He’s very unorthodox as well, but he’s a phenomenal opponent, an athlete that likes to push the pace, and Im also like that, so I can’t wait to put on a show for the people of Bahrain and around the world”, said Torres.

BRAVE CF 29 will be co-headlined by Adur vs Torres while the co-main event will be the final of the KHK World Championship, as four fighters face off in the semifinals earlier in the evening, as the winner of the one-night, four-men, open weight tournament will win a US$100,000 check plus the right to become the provisional holder of the KHK belt, the heaviest prize in sports, adorned with 6.2 kg of gold.