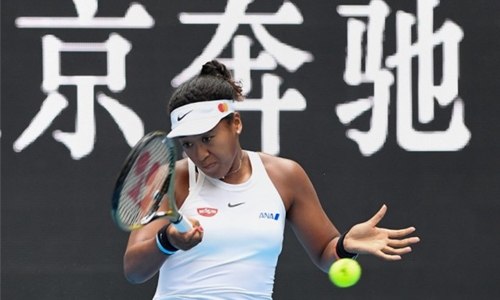 Two of the most exciting talents in tennis will meet for the first time today when Naomi Osaka and Bianca Andreescu clash in the China Open quarter-finals. On the eve of what could be the start of a long rivalry, the 21-year-old Osaka called the 19-year-old Canadian “an amazing player” and said “I have to learn from her”. The Japanese, on the upswing after a slump following her triumph at the Australian Open at the start of the year, smiled: “I’m older than her, very much so.

“I noticed that she seems to be very... just focused.” Osaka, yet to drop a set in three matches in Beijing and fresh from winning the Pan Pacific Open in Japan, earned her place in the last eight in style. The two-time Grand Slam champion said she was “angry relaxed” after a dominant 6-4, 6-0, win over unseeded American Alison Riske. Osaka, the world number four, reeled off 10 games in a row to seal victory.

“I’m relaxed, but I’m a little bit angry, it’s an angry relaxed,” said Osaka when asked what was behind her recent success in Japan and now China. “I know after Australia I was like, ‘I’m going to have fun’. It was not fun, I did not have fun,” she said, referring to her dip in form. Andreescu, ranked sixth and playing her first tournament since stunning Serena Williams in the final at Flushing Meadows, thrashed American qualifier Jennifer Brady.

The teenager, who is on a roll of 16 wins on the trot, started with intent, breaking Brady’s first service game on the way to a brutal 6-1, 6-3 win in 68 minutes. Also into the last eight in hot and hazy Beijing was reigning champion Caroline Wozniacki, a former world number one. She faces Russia’s Daria Kasatkina. Also in action on Friday is current women’s number one Ashleigh Barty of Australia, who plays the seventh seed Petra Kvitova of the Czech Republic.

In the men’s draw, the title-holder Nikoloz Basilashvili of Georgia was on course to pull off a surprise against Stefanos Tsitsipas of Greece. But the 21-year-old Tsitsipas, ranked seventh, came back to win 4-6, 6-3, 6-2 and will play big-serving John Isner of the United States in the quarter-finals.

Isner sent down 21 aces in defeating Britain’s Dan Evans in two sets. Also on Friday, former number one Andy Murray steps up his return from a career-saving hip operation when he plays top seed Dominic Thiem. It is the three-time Grand Slam champion’s first ATP singles quarter-final for a year.