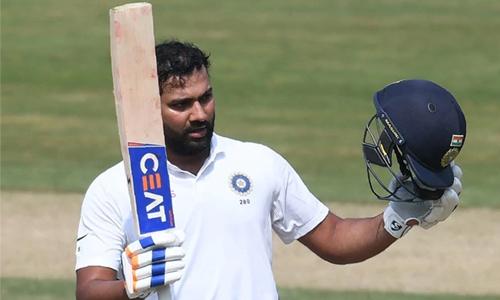 Rohit Sharma scored a century in his first innings as India’s new test opener and gave the hosts a flying start along with partner Mayank Agarwal in the first of the three-match series against South Africa at Visakhapatnam yesterday. Rohit and Agarwal ensured South Africa’s bowlers went wicketless on the first day to take India to 202 for no loss after home captain Virat Kohli won the toss and opted to bat.

Rohit completed his fourth test hundred and was unbeaten on 115 with Agarwal 84 not out - his best test score - when bad light and rain forced an early end to day’s play. The only player in the world with three double hundreds in one-day internationals, Rohit has built a formidable reputation as a limited-overs opener but batted in the middle order in his stop-start test career. The 32-year-old could not have hoped for a more benign pitch to begin his journey as a test opener with both the fast bowlers and spinners from South Africa failing to make any impact.

The visiting pace duo of Kagiso Rabada and Vernon Philander beat the bat on a few occasions with the new ball and those were the only moments of discomfort that the right-handed batting pair encountered. South Africa captain Faf du Plessis introduced spin in the ninth over in the form of Keshav Maharaj but it only allowed the Indian batsmen to score more freely. Rohit frequently danced down the pitch to the spinners, hitting five sixes to go with 12 fours.

A top - edged lap - swept four off debutant Senuran Muthusamy, which narrowly missed the fine leg fielder, brought up his fifty, and a slashed boundary that just eluded the gully fielder were among the rare moments when Rohit did not look in control.