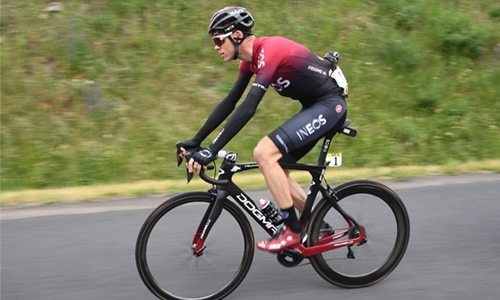 Froome happy to be alive as he targets fifth Tour title

Chris Froome admits he is “grateful to be alive” after a horrific high speed crash into a wall in June that left the four-time Tour de France winner with multiple fractures. However, despite still needing crutches to walk, Froome is targeting a record-equalling fifth Tour title and Olympic gold in Tokyo next year. The 34-year-old broke his neck, femur, elbow, hip and ribs when he crashed before stage four of the Criterium du Dauphine in France in June.

Such was the extent of his injuries, he initially feared his career, and not just his season, was over. “I’m grateful to be alive. I’m grateful to be on the road to recovery, I’m grateful that I’m able to recover,” Froome told the Daily Telegraph. “Now I’ve got to give it everything.” Froome’s Ineos teammate Egan Bernal took advantage of his absence to win the Tour de France in July. The Colombian is 14 years younger than Froome, who will be 35 when the 2020 Tour starts in Nice. No rider aged 35 or older has won cycling’s biggest race since Firmin Lambot in 1922.

But Froome is so convinced of his powers of recovery that he is targeting not just the gruelling three-week trek around France, but a double shot at Olympic gold in Tokyo a week later. “Both the TT (time trial) and the road race in Tokyo look very appetising,” added Froome. “And coming a week after doing the Tour -- assuming I’m doing the Tour -- it’s almost perfect. I’d like to throw my hat in the ring for both. “As for the Tour, going for a fifth title off what was potentially a career-ending crash -- that would be even bigger.

“Loads of people came out after the crash and said ‘he’s done, he’ll never win another Tour.’ They only spur me on.” The British rider is hoping to make his return to competitive action on a bike by the end of the year. “It would be great to be able to do some of those post-season events that I typically do in the off-season. Just to get back into the pro scene again.

Trump sings praises of one of his hotels on Twitter

Smith unbeaten on 59 as Aussies reply to England’s 294