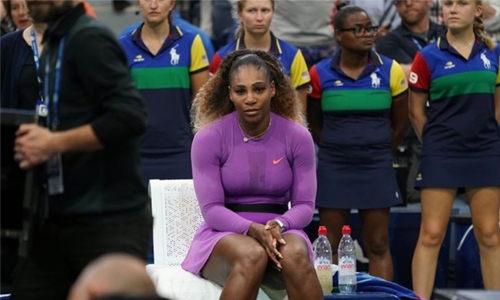 Serena Williams is wondering when she will start playing like a 23-time Grand Slam champion again in a major final, calling her poor showing in Saturday’s US Open final loss “inexcusable.” Williams fell to Bianca Andreescu on the same court where she won her first Grand Slam title 20 years ago, nine months before Andreescu was born. “I love Bianca. I think she’s a great girl. But I think this was the worst match I’ve played all tournament.

It’s hard to know that you could do better,” Williams said. “Bianca obviously played well. I think her returns make me play better and put pressure on my serve. “At the same time it’s inexcusable for me to play at that level.” Williams had 33 winners but just as many unforced errors. She hit nine aces but misfired eight double faults and hit only 44 percent of her first serves. She dropped 30 of 43 points on her second serve.

And she’s struggling to find answers for bad performances in the biggest matches. “All of it honestly, truly is super frustrating,” Williams said. “I’m so close, so close, so close, yet so far away. “I don’t know what to say. I guess I got to keep going if I want to be a professional tennis player. And I just got to just keep fighting through it.”

Williams, who turns 38 later this month, downplayed the pursuit of Court’s record. “I’m not necessarily chasing a record. I’m just trying to win Grand Slams,” she said. “It’s definitely frustrating, but for the most part I just am still here. I’m still doing what I can do.”