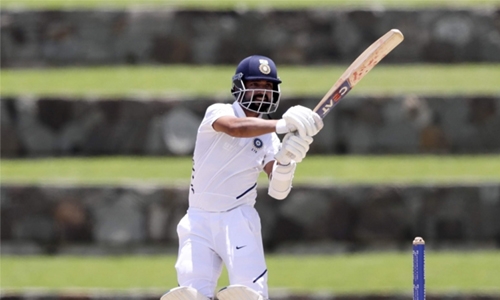 Ajinkya Rahane’s 18th half-century anchored India’s revival to 134 for four at tea on the opening day of the first Test against the West Indies at the Sir Vivian Richards Stadium in Antigua yesterday. Reduced to 25 for three by opening bowlers Kemar Roach and Shannon Gabriel after they were put in to bat, Rahane joined opening batsman K.L. Rahul in mid-morning, the pair putting on 68 for the fourth wicket to blunt the early threat of the home side’s pace attack in helpful conditions.

It took the off-spin of Roston Chase to separate them halfway through the afternoon session when Rahul, on 44, got a faint touch to an innocuous leg-side delivery for wicketkeeper Shai Hope to take a neat catch. It was Hope’s third catch of the innings in a role he would not have expected overnight as a lingering ankle injury to regular wicketkeeper Shane Dowrich ruled the first-choice gloveman out of the match.

With speculation over his continued value to the Indian team, giving the increasing competitiveness for places in their batting order, Rahane underscored his worth as a gritty, determined campaigner. His innings has so far occupied 122 deliveries with seven boundaries embellishing another invaluable hand from the pugnacious right-hander. He will resume in the final session on 50 alongside Hanuma Vihari (18 not out). It was all West Indies in the early exchanges though as Roach dismissed Mayank Agarwal and Cheteshwar Pujara in the fifth over of the day while Gabriel accounted for the prized wicket of captain Virat Kohli.

On a surface freshened by early morning rain and offering encouragement to the new ball bowlers, Roach induced edges from both Agarwal and Pujara for catches by Hope. While Gabriel lacked Roach’s persistent accuracy, his extra pace continued to challenge India’s top order and brought him the reward of Kohli’s wicket when the champion batsman, who made nine, attempted to guide a lifting delivery through backward-point only for debutant Shamarh Brooks to take a tumbling catch at gully.

Brooks, a 30-year-old middle-order batsman and occasional leg-spinner, has filled the vacancy in the 11 left by Dowrich’s unavailability. West Indies were also required to draft in an additional replacement when all-rounder Keemo Paul was ruled out on the eve of the match through injury and his place was taken by Miguel Cummins.

After dominating the preceding the T20 and One-Day International series, India will be seeking to extend their dominance in the Caribbean with a team featuring three fast bowlers and one specialist spinner, Ravindra Jadeja getting the job ahead of Ravi Ashwin.