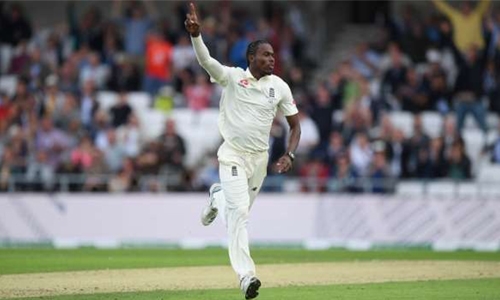 Marcus Harris and Usman Khawaja both fell cheaply before Australia reached 54-2 at tea yesterday’s rain-marred opening day of the third Ashes Test against England at Headingley. Only 18 overs in an original day’s allocation of 90 had been bowled when bad light forced an early tea, with David Warner 26 not out - his first double-figure score in five innings this series -- and Marnus Labuschagne seven not out.

Rain had previously stopped play at 2.45 pm (1345 GMT) after delaying the scheduled start by more than an hour. And there was further frustration for both England and a crowd who had waited patiently to watch cricket when, after play resumed, only 3.1 more overs were possible before the umpires suspended play for bad light even though the floodlights were on full blast. After a grinning Warner and Labuschagne sprinted off the field, umpires Chris Gaffaney and Joel Wilson were booed as they returned to the pavilion.

Wilson was later seen having an animated conversation on the dressing room balcony with several England players and backroom staff. England, looking to level the five-match series at 1-1, had seen captain Joe Root win the toss in the hope of making the most of overcast, bowler-friendly conditions.

Australia had dropped opener Cameron Bancroft, who had made just 44 runs in four innings, and brought in Harris to partner Warner at the top of the order after England had enjoyed the better of a rain-affected draw in the second Test at Lord’s. Both left-handed batsmen struggled against England’s new-ball attack of Stuart Broad and Jofra Archer.

The experienced Warner was repeatedly beaten by Broad jagging the ball off a length, while the express Archer, in his second Test, went past Harris’s outside edge. Archer, bowling from around the wicket, squared him up with an 87.3 mph delivery that saw Harris get a thin edge through to wicketkeeper Jonny Bairstow -- like Root appearing on his home ground. Moments after Harris had fallen for eight, with Australia 12-1 off four overs, the umpires took the players off the field because of rain.

It took Warner 14 balls to get off the mark as he continued to struggle, although Broad may have bowled a fraction too short with several deliveries beating the outside edge without really challenging the batsmen. But he did take a wicket when Usman Khawaja, the third left-hander in Australia’s top three, made thin contact with an intended leg glance and was caught behind as he too fell for eight.

England, however, had to review New Zealand official Gaffaney’s original not out decision before reducing Australia to 25-2. Australia, 1-0 up after their 251-run win in the first Test at Edgbaston, made three changes to their side. With Steve Smith ruled out with a concussion suffered when hit on the neck by a 92 mph Archer bouncer at Lord’s, Labuschagne -- cricket’s inaugural concussion substitute when replacing Smith in the second Test -- took over at Headingley.