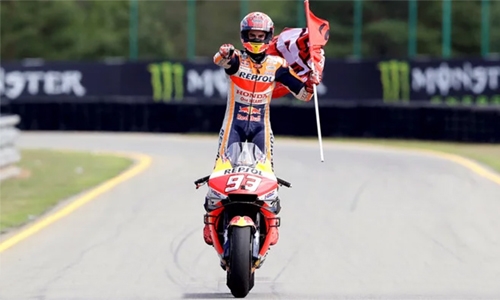 Honda’s Marc Marquez claimed his 50th career race win with victory at the Czech MotoGP yesterday after the race had originally been delayed by 45 minutes due to rain. Spain’s defending champion beat Ducati’s Italian Andrea Dovizioso by 2.4sec to extend his advantage at the top of the riders’ standings to 63 points with his sixth triumph of the season.

“I was really concentrating from the beginning because there was some wet patches on turn one but I decided to start and keep my rhythm,” Marquez, 26, told broadcaster BT Sport. “I saw ‘Dovi’ was behind me and I kept pushing and pushing and pushing. “I am very happy, it was a crazy weekend,” he added.

Dovizioso, 33, who won in Brno last year was back among the top three after disappointing results in Germany, the Netherlands and Catalonia before the four-week summer break. “Everyone was on the edge. I wanted to hold out until the end with him but his way of riding is a little bit different compared to last year,” he said. “But I’m happy get up on the podium,” Australian Jack Miller pipped Alex Rins to third spot for his second podium of the campaign in a race cut by one lap due to adverse weather conditions.

“This is definitely the better one (podium), it was nice to fight at the end,” Millar said. “I saw Rins’ rear tyre was spinning so I just bided my time, waited and waited and he was really struggling,” the 24-year-old added. Seven-time world champion Valentino Rossi was sixth and trails Marquez by 110 points in the overall standings.

Rins had accused fellow countryman Marquez of having ‘no respect’ for other riders after coming together with the five-time world champion during Saturday’s qualifying. Suzuki’s Rins was angered by what he saw as Marquez altering his line and making contact with him during the second session of the day