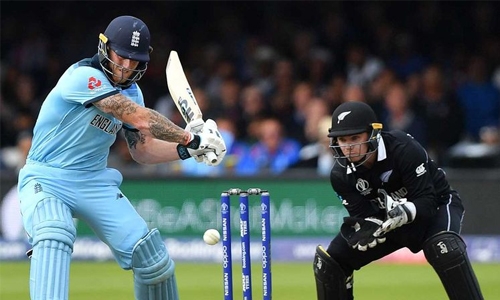 Eoin Morgan paid tribute to the “almost superhuman” Ben Stokes after the all-rounder played a pivotal role in England’s stunning Super Over win against New Zealand in a thrilling final at Lord’s on Sunday. Morgan’s men needed 39 runs off the final 23 balls to win when Chris Woakes holed out but thanks to man-of-thematch Stokes’s 84 not out, they tied New Zealand’s target of 241 off 50 overs.

He was then chosen to bat the Super Over with Jos Buttler and although both teams scored 15 runs, England won by virtue of scoring more boundaries in the match. “It’s been phenomenal -- people believed because we believed,” said Morgan. “It’s been an incredible day. Sport is often about fine margins. Today was the finest of margins.” “ To come through it was extraordinary, almost a superhuman way to carry the innings.

His (Stokes’s) partnership with Jos was extraordinary -- everyone back home is hopefully trying to be the next Ben Stokes,” Morgan said. All-rounder Stokes’s heroics came three years after he he was hit for four straight sixes by Carlos Brathwaite in the last over of West Indies’ stunning World Twenty20 final win over England in India. It also represented a redemption of sorts for the Durham star, born in Christchurch, New Zealand, after a 2017 street brawl and subsequent court case threatened to ruin his career and he wept openly during the jubilant on-field celebrations.

“I said it before but a lot of careers would have been ended after what happened in Calcutta (Kolkata),” said Morgan. “The way he trains, he’s an incredible cricketer. Today, he’s had a day out.” Morgan admitted he was struggling to take in that England’s 44-year wait for a first World Cup crown had at last come to an end after three losing appearances in finals. “Absolutely unbelievable, I still can’t quite believe it,” he said.

“I thought it was over when Chris Woakes got out but then Liam Plunkett got us back into the game and we had the rub of the green with Ben’s overthrows (a deflection off Stokes’s bat went for four overthrows).” Victory completed four years of painstaking work for Morgan, who captained the side to a humiliating group-stage exit at the 2015 World Cup. England have since recovered to become the top-ranked side in the world, but were on the verge of failing to make the semi-finals once more after losing to Pakistan, Sri Lanka and Australia in the group stage.