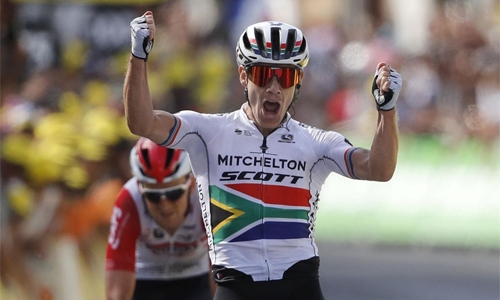 A South African, Daryl Impey, won stage nine of the Tour de France leaving local fans to settle for Frenchman Julian Alaphilippe keeping hold of the yellow jersey on Bastille Day. Mitchelton-Scott rider Impey was part of a mass breakaway that quickly opened a 10-minute gap and extended it throughout the race with the pack eventually trailing in 16 minutes adrift.

Defending champion Geraint Thomas and the other overall title contenders finished together in a low-key ending after allowing the 14-man break to open up an uncatchable lead on the 170km run. “That was a really tough race. I’m so happy to win on July 14,” said Impey.

The 2019 Tour Down Under winner and all-rounder won a Tour de France team time-trial back in 2013, and a few days later took the overall lead to become his nation’s first yellow jersey holder. “This is my greatest ever victory, just as good as wearing the yellow jersey, nothing can top this,” he said.

“It was a tough, solid day.” Impey is a teammate of the British Yates twins, with Adam angling for the overall title this year. “There’s no way I was getting involved in a breakaway today, but I expected a select bunch sprint,” team leader Adam said.

After a frantic day over seven mountains on Saturday, the stage embarked from the SaintEtienne football stadium in a festive Bastille Day atmosphere with many fans shouting for local man Romain Bardet as well as Alaphilippe.