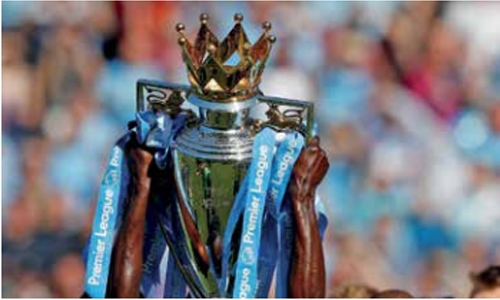 Liverpool to lift replica if they win Premier League

If Liverpool upset the odds and pip Manchester City to the Premier League title on Sunday, the silver trophy they lift for the first time will not be the original but a replica, The Times reported yesterday. Liverpool trail Manchester City by a point ahead of the final day of the season, when they host Wolverhampton Wanderers while the league leaders travel to Brighton and Hove Albion knowing a win will make them champions.

Since matches on the final day of the season are played simultaneously, the Premier League will have a replica trophy on standby at Anfield in case Juergen Klopp’s side win the title. The replica is used by the Premier League and often on display in television studios and on promotional tours. The original, which has been at City’s Etihad Stadium since they won it last year, will be shipped to Brighton for Sunday’s game.

League winner’s medals will also be made available at both stadiums and any player who has made at least five appearances this season will receive one. That is currently 21 players at City, 19 at Liverpool. Liverpool have been English league champions 18 times but their last title came in 1990 before the Premier League was formed.

In happy Bhutan, the PM is a doc on Saturdays