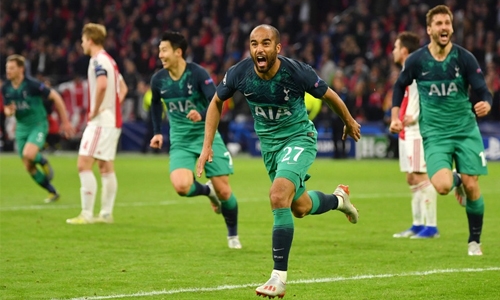 An emotional Mauricio Pochettino called his Tottenham Hotspur players “super-heroes” after they reached the Champions League final for the first time in their history as a Lucas Moura hat-trick saw them come back from the dead to beat Ajax on Wednesday and leave the Dutch side heartbroken. Ajax’s improbable European run seemed set to go on all the way to the final as they led 3-2 on aggregate deep in stoppage time in the second leg of the semi-final at the Johan Cruyff Arena.

That was when the ball broke to Lucas in the box and the Brazilian sent a low shot beyond Ajax goalkeeper Andre Onana to seal their comeback, making it 3-2 to them on the night, 3-3 on aggregate, and taking Pochettino’s men through on away goals. They will now face fellow comeback kings Liverpool in Madrid on June 1, the first all-English showpiece since 2008. “It is one of the most important nights in my life,” said Pochettino, who was in tears at full-time.

“The most important thing is to congratulate my players. They did a great job.” “I have said before that they are heroes. I think they are super-heroes now. To have brought the club to the final of the Champions League is very close to a miracle.” For Lucas there was similar emotion, the player rejected by Paris Saint-Germain as they made way for Neymar stepping up in the ongoing absence of Tottenham’s talisman Harry Kane. “Football gives us moments like this that we cannot imagine,” said Lucas. “We need to enjoy it. Look at me –- it’s the best moment in my life, my career.”

The Ajax players slumped to the turf as his deciding goal went in, their fans stunned as they fell short of a first final since 1996. Leading 1-0 after the first leg, the thrilling Dutch side appeared to have killed the tie after captain Matthijs de Ligt and Hakim Ziyech scored in the first half here. That left Tottenham needing a comeback to match that of Liverpool against Barcelona the previous night, but in an even shorter amount of time.

A quickfire brace by Lucas early in the second half gave them something to cling to, before he struck the decisive blow. Erik ten Hag’s team, who had already eliminated Real Madrid and Juventus, were applauded by their devastated fans at fulltime and must now somehow lift themselves to try to complete a Dutch league and Cup double.

They will take some time to get over falling short of what may be a once-in-a-generation chance to get back to the final of this competition. “I told the players it is very hard to find the right words in a moment like this and that football is cruel,” said Ten Hag, whose team will now inevitably be broken up without having the chance to grace the biggest stage in the club game.

“We have to endure the cruel side tonight but we have to go on.” Ajax did go on here, starting brilliantly on the night despite the blow of losing Brazilian winger David Neres to injury just before kick-off, with Kasper Dolberg taking his place.

That last-minute switch did not perturb them, as they took a fifth-minute lead, Lasse Schoene’s corner being headed in by De Ligt. Spurs did threaten an immediate reply as a Son Heung-min cross hit the near post, but Ajax escaped and came again, a Tadic shot that fizzed just wide acting as a prelude for what was to follow in the 35th minute.

This time Tadic cut the ball back for Ziyech, whose shot on his left foot flew into the far corner from a difficult angle, a wonderful goal that had surely clinched the tie.