Venom: Tom Hardy’s super-villain flick is less than a Marvel | THE DAILY TRIBUNE | KINGDOM OF BAHRAIN 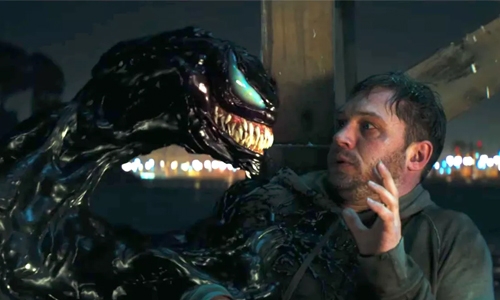 Venom: Tom Hardy’s super-villain flick is less than a Marvel

Venom is a 2018 American superhero film based on the Marvel Comics character of the same name, produced by Columbia Pictures in association with Marvel and Tencent Pictures. Distributed by Sony Pictures Releasing, it is the first film in Sony’s Marvel Universe, adjunct to the Marvel Cinematic Universe (MCU). Directed by Ruben Fleischer from a screenplay by Scott Rosenberg, Jeff Pinkner, and Kelly Marcel, it stars Tom Hardy as Eddie Brock / Venom, alongside Michelle Williams, Riz Ahmed, Scott Haze, and Reid Scott.

In Venom, journalist Brock gains superpowers after being bound to an alien symbiote whose species plans to invade Earth. The review aggregation website Rotten Tomatoes reports an approval rating of 29% based on 308 reviews, with an average rating of 4.4/10. The website’s critical consensus reads, “Venom’s first standalone movie turns out to be like the comics character in all the wrong weays—chaotic, noisy, and in desperate need of a stronger attachment to Spider-Man.”

Metacritic, which uses a weighted average, assigned a score of 35 out of 100, based on 46 critics, indicating “generally unfavourable reviews”. Reviewing the film for Variety, Owen Gleiberman called it “a textbook case of a comic-book film that’s unexciting in its ho-hum competence, and even its visual-effects bravura”.

He criticised Hardy’s performance as acting like “a stumblebum Method goof ”, and felt the film spent too long on Venom’s origin story when it should have been what a sequel likely will be. He added that the film may not be as bad a start to a new shared universe as The Mummy (2017), but it “could turn out to be a similar case of a franchise kickoff that doesn’t fully attain franchise liftoff”.

Ty Burr of The Boston Globe scored the film oneand-a-half stars and said it “saps the life force of almost everyone in it” including Hardy, Williams, and Ahmed whose performances he all criticised. He also criticised Fleischer’s direction as “unfocused” and Libatique’s cinematography as some of the “dingiest” of 2018, but did feel that the scenes where Hardy and Venom talk while sharing a body were “reasonably amusing”.

Mark Daniell at the Toronto Sun criticised the film’s tone, effects, and characters, compared it to a rejected superhero film treatment from the 1990s, and said it was the worst Marvel film released since Elektra (2005).