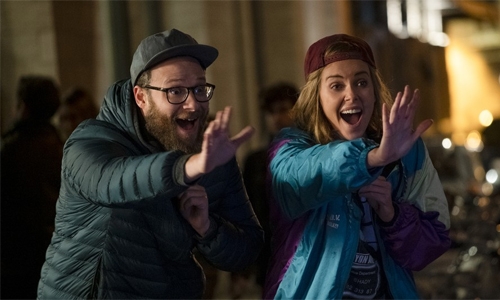 Long Shot is a 2019 American romantic comedy film directed by Jonathan Levine and written by Dan Sterling and Liz Hannah. The plot follows a journalist (Seth Rogen) who begins to spend time with his former babysitter (Charlize Theron), now the United States Secretary of State.

O’Shea Jackson Jr., Andy Serkis, June Diane Raphael, Bob Odenkirk, and Alexander Skarsgård also star. The film had its world premiere at South by Southwest on March 9, 2019, and was released in United States and Canada on May 3, 2019, by Lionsgate. It received generally positive reviews from critics, with praise for the chemistry and performances of Rogen and Theron.

On review aggregator website Rotten Tomatoes, the film holds an approval rating of 83% based on 203 reviews, with an average rating of 7.05/10. The website’s critical consensus reads, “A sharp and deceptively layered comedy that’s further fuelled by the odd couple chemistry of its leads, this Long Shot largely hits its marks.”

On Metacritic, it has a weighted average score of 67 out of 100, based on 43 critics, indicating “generally favourable reviews”. Audiences polled by CinemaScore gave the film an average grade of “B” on an A+ to F scale, while those at PostTrak gave it 3.5 out of 5 stars and a 57% “definite recommend”.