In a first, baby born via uterus transplanted from dead donor | THE DAILY TRIBUNE | KINGDOM OF BAHRAIN 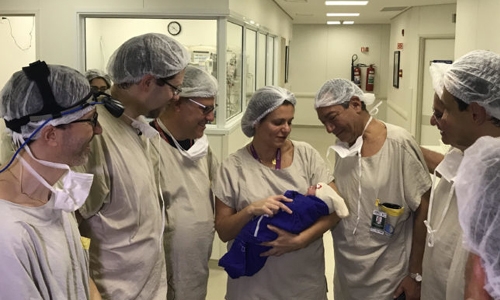 In a first, baby born via uterus transplanted from dead donor

In a medical first, a mother who received a uterus transplant from a dead donor gave birth to a healthy baby, researchers reported yesterday. The breakthrough operation, performed in September 2016 in Sao Paulo, Brazil, shows that such transplants are feasible and could help thousands of women unable to have children due to uterine problems, according to a study published in The Lancet. The baby girl was born in December 2017, the medical journal added.

Until recently, the only options available to women with so-called uterine infertility were adoption or the services of a surrogate mother. The first successful childbirth following uterine transplant from a living donor took place in 2014 in Sweden, and there have been 10 others since then. But there are far more women in need of transplants than there are potential live donors, so doctors wanted to find out if the procedure could work using the uterus of a woman who had died.

Ten attempts were made -- in the United States, the Czech Republic, and Turkey -- before the success reported yesterday. Infertility affects 10 to 15 percent of couples. Of this, one in 500 women have problems with their uterus that prevent them from becoming pregnant and carrying a child to term. “Our results provide a proofof-concept for a new option for women with uterine infertility,” said Dani Ejzenberg, a doctor at the teaching hospital of the University of Sao Paulo.

He described the procedure as a “medical milestone”. The 32-year-old recipient was born without a uterus as a result of a rare syndrome. Four months before the transplant, she had in-vitro fertilisation resulting in eight fertilised eggs, which were preserved through freezing. The donor was a 45-year-old woman who died from a stroke. Her uterus was removed and transplanted in surgery that lasted more than ten hours. Mother and baby left the hospital three days later.