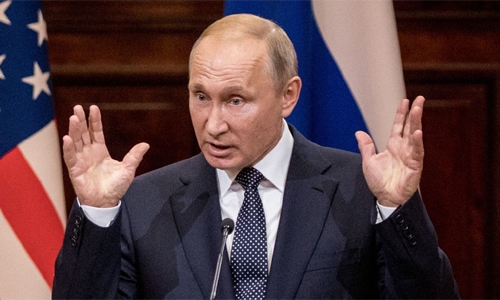 President Vladimir Putin yesterday dismissed US claims Russia is violating a major Cold War treaty limiting mid-range nuclear arms, as a senior general lashed out at Washington’s attempts to “contain” Moscow. The tense rhetoric comes a day after Secretary of State Mike Pompeo said Washington would withdraw from the Intermediate-Range Nuclear Forces treaty (INF) within 60 days if Russia does not dismantle missiles that the US claims breach the deal.

“First the American side stated its intention to withdraw from the treaty... then it began to look for the justifications for doing so,” Putin said in comments carried by Russian news agencies. “The primary justification is that we are violating something. At the same time, as usual, no evidence of violations on our part has been provided,” he said. The comments echoed earlier statements from the Russian foreign ministry, which dismissed the accusations against Moscow as “groundless”.

In October, President Donald Trump sparked global concern by declaring the United States would pull out of the deal and build up America’s nuclear stockpile “until people come to their senses”. But on Monday, the US leader said he wants talks with Putin and his Chinese counterpart Xi Jinping “to head off a major and uncontrollable arms race”. Kremlin spokesman Dmitry Peskov said facts had been distorted “in order to camouflage the true goal of the US withdrawing from the treaty”.

Meanwhile, the Russian Army Chief of Staff Vasily Gerasimov said that Moscow would increase the capabilities of its ground-based strategic nuclear arms. “One of the main destructive factors complicating the international situation is how the US is acting as it attempts to retain its dominant role in the world,” he said in comments released by the defence ministry. “It is for these purposes that Washington and its allies are taking comprehensive, concerted measures to contain Russia and discredit its role in international affairs.”

Rrecord with a Dead Sea of plastic bags