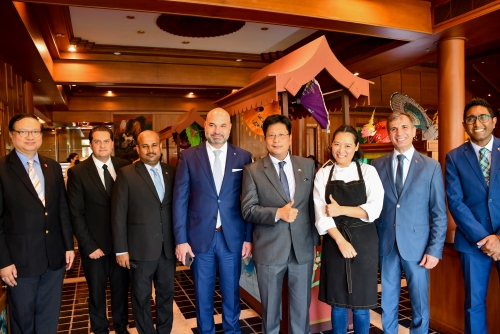 Hong Thaimee, is a chef, entrepreneur, and philanthropist, who has served as a global ambassador for Thai cuisine and culture for nearly a decade. She continues to build her brand as one of the most prominent and visible Thai chefs.

In October 2021, she opened her modern homestyle dining concept, Thaimee Love, where she has set the standard for serving authentic and accessible Thai cuisine. Chef Thaimee will be offering her spectacular culinary creations in Bahrain at the Gulf Hotel from June 21st to 25th.

In addition to this, she will be organizing a cooking class on Saturday, June 25th. Royal Thai Restaurant: Gulf Hotel’s exotic Royal Thai restaurant, which opened in 2000, is situated beside the hotel’s tropical gardens, overlooking the scenic turquoise waters of the outdoor pool.

The authenticity of this glamorous setting is further enhanced inside the restaurant as guests are greeted with enchanting Asian décor and world-class Thai cuisine. With its spectacular menu, the restaurant offers visitors a variety of options, curried and spiced to perfection by the culinary team - a guaranteed mix of traditional and modern Thai food. The restaurant also offers two private dining rooms, for an intimate experience of the food and ambience.