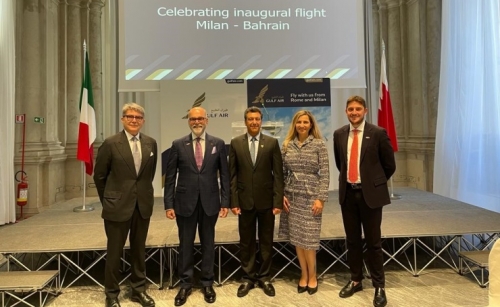 The luncheon also included trade and travel representatives and members of the media.

“Milan is one of the EU's and the world's major financial and business centres. From finance to fashion, from designer automobiles to discerning music, from architecture to art; the city of Milan is undeniably one of the most popular destinations in Europe attracting millions of visitors every year,”Gulf Air Acting Chief Executive Officer Captain Waleed AlAlawi said.

“By launching services to Milan we are not only opening new doors of trade and tourism opportunities this city offers to the people and businesses of Bahrain and the region; but also bringing new commercial and other opportunities to Bahrain, the gateway of the Arabian Gulf and beyond.”

Captain AlAlawi thanked the attendees for their support of the expansion of Gulf Air in Italy, appreciating their efforts in launching the new route.

Milan is the capital of the region of Lombardy and of the province of Milan. An international and cosmopolitan city, the city remains one of Europe's main transportation and industrial hubs, and Milan is one of the most important centres for business in the EU, and is amongst the leading financial centers in Western Europe in 2022.