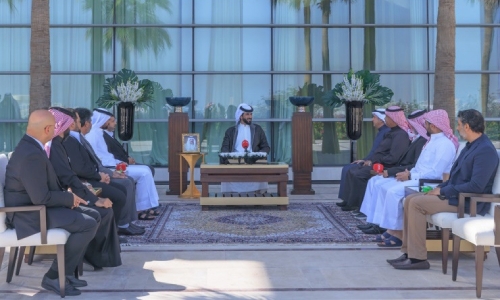 Representative of HM the King for Humanitarian Work and Youth Affairs and Board of Directors Chairman of the Oil and Gas Holding Company B.S.C (Nogaholding), His Highness Shaikh Nasser bin Hamad Al Khalifa, has affirmed that everyone is keen to achieve His Majesty King Hamad bin Isa Al Khalifa’s visions and aspirations in the oil and gas sector, which boasts a long history in the kingdom.

While receiving here today the workers’ trade unions of the subsidiary companies of the National Oil and Gas Holding Company, HH Shaikh Nasser indicated that all the affiliates of these companies are dedicated to achieving the visions of HM the King to boost this vital sector professionally to consolidate the kingdom’s leading status in this field.

HH Shaikh Nasser highlighted the importance of the role of trade unions in supporting workers’ rights, protecting them and advancing their professional development, as well as spreading trade union awareness and promoting social dialogue, as always directed by HM the King, noting that the company is keen to support heads of associations in settling all labour aspects.

HH Shaikh Nasser asserted that this meeting embodies the company’s role in supporting all unions and building a reliable and solid relationship between employees and the board of directors to enhance confidence among all parties.

“We are always keen to strengthen the governance systems of Nogaholding and its subsidiaries and give them freedom and independence in their decisions, which was evident in the past period through the restructuring of the company and its separation from the National Oil and Gas Authority, in addition to adopting strategies that would improve the flow of commercial and administrative policies and procedures among companies and enable them to compete at the international level,” HH said.

"We will open a direct and continuous channel for open and transparent communication.

This confirms our progress towards continuing the advancement. The companies' boards are not participating in the meeting to create a safe and comfortable space for open dialogue and to share concerns and aspirations.

We commend the efforts of directors of companies, and stress the importance of constant dialogue, consultation and cooperation between both parties, as well as urge them to continue the improvement process and achieve world standards,” HH added.

HH Shaikh Nasser underlined the important role played by trade unions to successfully lead this vital transformation of the oil and gas sector, affirming that strengthening and supporting our workforce is a priority, and indicating his keenness to support them to achieve constant distinction.

HH Shaikh Nasser announced the establishment of an integrated whistleblowing policy across the Nogaholding’s group of companies to ensure that workers are always supported and heard and that their concerns are addressed in a genuine, professional and timely manner, as well as make sure that practices in all areas are sound and ethical, adding that the reporting mechanism will be clear and follows directly the office of the Chairman of the Board of Directors and is subject to the highest standards of transparency and independence.

HH Shaikh Nasser recommended creating a mechanism and codifying a system of measures and guarantees that would protect workers and their rights, in addition to strengthening this important practice that supports the Kingdom's efforts.

HH wished the trade unions and all workers success, stressing that everyone is seeking to enhance the prosperity of these vital sectors.

HH Shaikh Nasser was keen to respond to all inquiries raised by trade unions' officials and gave directives to submit proposals aimed at continuing to develop the oil and gas sectors, provided that prizes are allocated to those who come up with distinguished ideas.

Officials of workers’ trade unions expressed thanks and appreciation to HH Shaikh Nasser for his constant keenness to support them, pledging that they will do their utmost to develop the oil and gas sector in the kingdom.