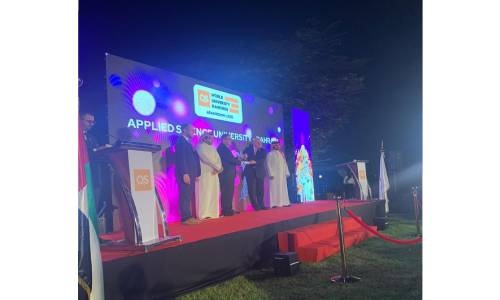 By achieving this ranking, the University has imposed itself on the map of distinguished universities, not only at the local level, but at the Arab and international levels.

In the QS World University Rankings for 2022, ASU was ranked 591-600, in addition to being ranked along the top 150 universities under 50 years old in the world for the year 2021, and it is the only university in the Kingdom of Bahrain to have Four Stars in the QS Stars Ratings, and was also ranked among the top 550 universities in the world in the QS Graduate Employability Rankings for the year 2022, in addition to obtaining a 401+ ranking in the Times Higher Education Impact Ranking for Achieving the Sustainable Development Goals, and 37 th in the Arab world in the Green Metric Ranking of Green and Environmentally Friendly Universities.

At the local level, the university succeeded in passing the Institutional Review by the Education and Training Quality Authority, where the official report of the authority showed that the university met all the required standards and indicators.

Prior to that, the University has also achieved the Institutional Accreditation from the Higher Education Council.

The University also achieved the ISO 9001:2015 certification for its administrative support services and has achieved the ISO 21001:2018 certification for its educational delivery, making it the first university in Bahrain and the Arab Gulf to achieve this double certification. In addition, ASU collaborated with the British Higher Education Academy to qualify its faculty members to obtain a fellowship certificate from the Academy. The latter chose the University to become an accredited training center, and as a result a large number of the University staff members obtained fellowship of the academy. As for research, the University succeeded in publishing 181 scientific research papers in international refereed scientific journals during the past year.

On this occasion, the Chairman of the Board of Trustees, Professor Waheeb Al Khaja, stated that the University’s progress in the international rankings of universities confirms the prestigious position it has reached at the local, Arab and international levels, which constitutes an incentive to work even harder in the coming years to deliver excellence and enhance the quality of education it provides.

He extended his thanks and appreciation to the Minister of Education, H.E. Dr. Majid bin Ali Al Nuaimi, members of the Higher Education Council, the General Secretariat of the Higher Education Council and its Secretary General, H.E. Dr. Sheikha Rana bint Isa bin Daij Al Khalifa, for their tireless efforts to develop education in Bahrain and their constant support for its educational system. For his part, the President of the University, Professor Ghassan Aouad, explained that  achieving this success came thanks to the efforts of the University as one-cohesive team, composed of its senior management and all of its academic and administrative staff.

In turn, Dr. Mohammed Yousef Ahmed, Vice President for Administration, Finance and Community Engagement, expressed his pride and joy seeing the University rankled 22 nd at the

Arab level, noting that this achievement comes within the University’s vision to achieve leadership in higher education and as part of the University’s continuous efforts to enhance its position among Arab and international universities. He further explains that the chief objective remains to create an academically qualified student and yield competent graduates as per the international standards of quality assurance for education, and in line with the Higher Education Strategy of the Higher Education Council in the Kingdom of Bahrain.

The University had received the Rankings Certificate from the Secretary General of the Association of Arab Universities, Professor Amr Ezzat Salama, at the ceremony held in the Emirate of Dubai, United Arab Emirates, and attended by Professor Ghassan Aouad, President of the University, Dr. Mohammed Yousef Ahmed, Vice President for Administration, Finance and Community Engagement, and Mr. Abdullah Al Khaja, Director of Administration and Finance.