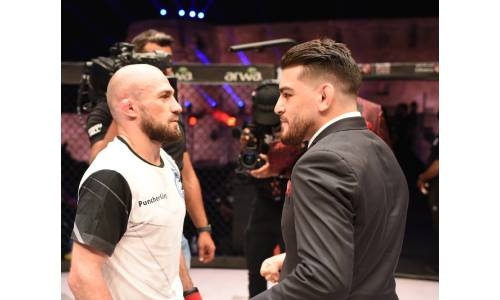 BRAVE Combat Federation has raised the stakes in its highly-anticipated return trip to Russia on November 6 as four scheduled bouts on the card have serious World Title implications.

The extravaganza numbered “BRAVE CF 55” is headlined by the Flyweight World Title Tournament semi-final duel between Russia’s very own Ali “The King Puncher” Bagautinov and Jose “Shorty” Torres of the United States--with the winner moving on to face the highly-touted Velimurad Alkhasov in the finals.

With a chance to get a shot at the inaugural BRAVE CF Flyweight World Championship up for grabs, the main event has plenty of prestige and excitement in store at the top of the bill.

Meanwhile, Mohammad “The Latest” Fakhreddine could meet the next challenger for his BRAVE CF Middleweight World Title at the organization’s next show in Rostov-onDov as Rustam “The Russian Bear” Chsiev battles former division kingpin Daniel “Gaucho” Pereira of Brazil.

Aside from the aforementioned two match-ups, there are two other fights on the card that fight fans should be on the lookout for.

Russia’s Kamil Magomedov and Sam “The Future” Patterson will put their winning streaks at stake against each other as both fighters are undefeated since 2017 and 2018 respectively, with a potential crack at Ahmed “The Buttcher” Amir’s BRAVE CF Lightweight World Championship on the line.

On the other hand, Luis Felipe Dias and Kamal Magomedov will both be making their promotional debuts in what is expected to be a potential eliminator for the vacant BRAVE CF Super Welterweight World Championship.

With world-class skills, crazy athleticism, and plenty of determination on both sides of every matchup, BRAVE CF 55 presents a strong case to be 2021’s signature event.

The event will be broadcast live from Rostov-on-Don, Russia at 1:00PM (GMT)