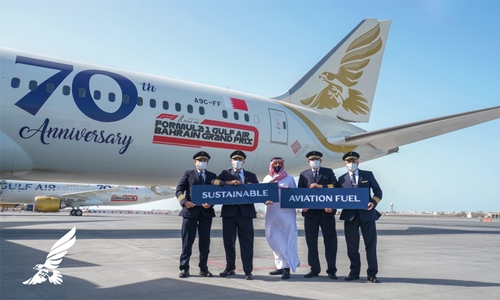 Gulf Air, the national carrier of the Kingdom of Bahrain, in cooperation with Formula 1, Boeing Rolls-Royce and Neste plan performed a lower emission flypast at the 2021 Formula 1 season opener at the Bahrain International Circuit in Sakhir yesterday evening.

The airline launched its new corporate slogan – A Class of Our Own – representing Gulf Air’s legacy over the years, highlighting its individuality and ambition to be the best in class while adding its unique touch to its products and services. Boeing 787-9 Dreamliner aircraft are scheduled on Gulf Air’s long-haul routes and are equipped with Rolls-Royce Trent 1000 engines which boast superior fuel efficiency and reduced emissions, consuming 20% less fuel and producing around 20% fewer emissions than the aircraft they replaced in Gulf Air’s previous fleet.

Neste MY Sustainable Aviation Fuel provides an immediate solution for reducing the carbon emissions of flying. In neat form and over the life cycle, its use results in up to 80%*lower greenhouse gas emissions compared to fossil jet fuel*. Gulf Air Acting Chief Executive Officer Captain Waleed AlAlawi said: “Each year, Gulf Air takes great pride in being the title sponsor of the Formula 1 race at the Bahrain International Circuit.

This year, we marked the beginning of the race with a truly special low emission flypast highlighting our future strategy to explore the use of Sustainable Aviation Fuel in our aircraft and standing by our commitment to lower our carbon emissions.”

Formula 1 President and CEO welcomed the “very positive move” that shows the commitment of the Kingdom of Bahrain to deliver a more sustainable future for the country, saying “this is another example of how new technologies can make a real difference to our sport and the wider world and is an important part of our plan to be Net Zero Carbon as a sport by 2030.” mar Arekat, Vice President of Commercial Sales and Marketing Middle East, Africa and Turkey, spoke on behalf of Boeing: “Climate change is one of the most fundamental challenges of our time, and the aviation industry is united in our commitment to reduce greenhouse gas emissions. We are proud that Gulf Air is using their Boeing 787-9 Dreamliner to showcase its commitment to sustainable air travel.”

Jonathan Wood, Neste Vice President Renewable Aviation, said the company looks forward to increasing the use of Sustainable Aviation Fuel in the Gulf region, given its leading role in the global aviation sector.

A sigh of relief for Bahrain International Circuit chief