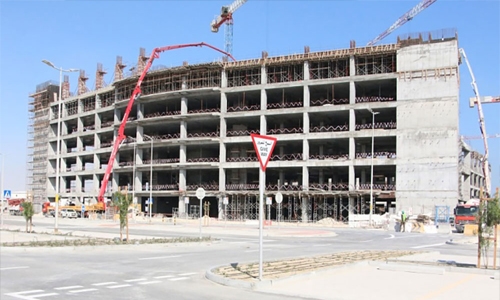 The construction work at the Arab Gulf University’s King Abdullah bin Abdulaziz Medical City Hospital has gone a long way and it is expected to be completed at the end of this year. It will be ready to be operational and receive patients early next year.

The project aims to become a benchmark for excellence in healthcare and education in the Gulf region. Dr Khaled Tabbara, who is in charge of supervising the progress of the project, assured that the construction work of the university hospital is proceeding according to schedule despite the pandemic.

Last month, two batches of academic staff from the College of Medicine and Medical Sciences and the College of Graduate Studies visited the site located in the Southern Governorate. Dr Tabbara briefed them on the progress of construction works being carried out according to their specified dates.

He expressed his deep thanks and appreciation to the Custodian of the Two Holy Mosques King Salman bin Abdulaziz Al Saud for his directives to continue to support the project. He also thanked His Majesty the King Hamad bin Isa Al Khalifa, who directed the provision of a land grant for the project on an area of one million square metres.

But while the pandemic has affected the progress of the project, the university is working with its contractors to develop alternative plans to complete the project on time. The project cut advanced stages that represent more than 40% of the completion period. It includes preparations for the next phase such as offering tenders for the provision of medical devices and furniture.

The construction work is being implemented in four phases. The first phase includes the implementation of electricity, water and sewage networks, and fire-fighting, irrigation and rainwater drainage networks that are in addition to the construction of internal roads and installation of street lighting.

It was a grant from the late King Abdullah bin Abdulaziz Al Saud, who instructed to construct the SR1 billion worth medical city in Bahrain as a gift from the people of Saudi Arabia to the people of Bahrain.

It will be a multiple phased, mixed-use development, comprising an Academic Medical Centre, an innovative teaching hospital built in two phases, a state-of-the-art Medical University Campus with Research and Conference Facilities, onsite accommodation for both staff and students, and other communal facilities to create a self-sustained campus.

The design concept was to create a supportive environment for healing and learning. Phase 1, the Academic Medical Centre, will offer 269 inpatient beds, 12 birthing rooms and 11 operating theatres as well as high-quality diagnostic and treatment services in four primary specialities; medicine, surgery, women’s and children’s healthcare.

The completion of the development will see the capacity of the hospital increased to over 500 beds, with an academic school, a research facility, medical hotel, rehabilitation hospital and on-site accommodation for students and staff.

Three Asians held for stealing BD2,300 worth of gold in Juffair