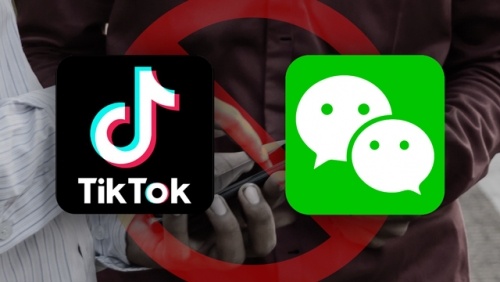 US President Donald Trump has unveiled sweeping bans on US transactions with the Chinese owners of messaging app WeChat and video-sharing app TikTok, escalating a high-stakes confrontation with Beijing over the future of the global tech industry.

China said on Friday the companies comply with US laws and regulations and warned that the United States would have to “bear the consequences” of its action. “The US is using national security as an excuse and using state power to oppress non-American businesses. That’s just a hegemonic practice,” foreign ministry spokesman Wang Wenbin told a media briefing.

TikTok has come under fire from US lawmakers over national security concerns surrounding data collection as distrust between Washington and Beijing grows. Reuters on Sunday reported that Trump has given Microsoft Corp 45 days to complete the purchase of TikTok’s US operations.

“We are shocked by the recent Executive Order, which was issued without any due process,” TikTok said in a statement on Friday, adding that it would “pursue all remedies available to us in order to ensure that the rule of law is not discarded”.

The ban on US transactions with Tencent, one of the world’s biggest internet companies, portends further fracturing of the global internet and severing of long-standing ties between the tech industries in the United States and China.

“This is the rupture in the digital world between the US and China,” said James Lewis, a technology expert with Washington-based think-tank Center for Strategic and International Studies. “Absolutely, China will retaliate.” On Wednesday, US Secretary of State Mike Pompeo expanded a programme dubbed “Clean Network” to prevent various Chinese apps and telecoms firms from accessing sensitive information on US citizens and businesses.

Trump’s new orders appeared coordinated with Pompeo’s announcement, Lewis said. “We are reviewing the executive order to get a full understanding,” a Tencent spokesperson said. ByteDance declined to comment.