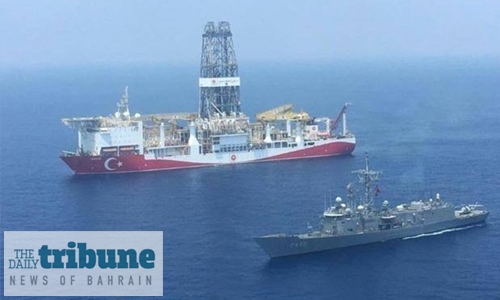 Six months into his term, Greek Prime Minister Kyriakos Mitsotakis heads to his first White House visit today amidst tense relations with NATO ally and regional rival Turkey. Athens is keen to enlist US investors for the growth spurt envisioned by the Greek conservative government -- but the visit comes as tensions escalate with Turkey over migration, energy exploration and territorial disputes.

“Greece and the United States are closer than ever,” Mitsotakis said in a December 29 interview with the weekly, To Vima. “Greece is a reliable ally and I expect this to be confirmed with deeds, not just words,” he said. The US has traditionally maintained a difficult balancing act between Greece and Turkey over the past six decades, with the Clinton administration actually stepping in to prevent hostilities over an uninhabited Aegean islet group in 1996.

But Trump has often struck a dissonant tone in his administration’s foreign policy, preferring to forge personal bonds even with the leaders of countries whose policies have on occasion been rebuked by the US State Department or Congress. Turkish President Recep Tayyip Erdogan is one of them. “It goes without saying that the political unpredictability of the American president creates a foggy scenery,” says Spyridon Litsas, professor of international relations at the University of Macedonia in Thessaloniki.

“Mitsotakis travels to Washington in order to demonstrate to American political and economic elites that besides Turkish unreliability in the eastern Mediterranean, there is also Greece, a pivotal state for the balance of power in the region, a fundamental actor regarding the re-shaping of the regional energy map, and a fertile ground for investment,” Litsas told AFP. Greek relations with Turkey are at their lowest point in decades.

In November, Erdogan signed a contentious maritime and military deal with the embattled UN-backed Libyan government. Swiftly condemned by neighbouring states including Greece, Cyprus and Egypt, the move is seen by analysts as part of a Turkish strategy to avoid exclusion from the gas exploration scramble in the region. Mitsotakis came to power in July after defeating leftist former PM Alexis Tsipras in national elections.

Trump in December signed the EastMed Act, an initiative to facilitate energy cooperation among the US, Israel, Greece and Cyprus. On Thursday, Greece, Cyprus and Israel launched a major pipeline project -- also called EastMed -- designed to ship gas from the eastern Mediterranean to Europe.

Greece a ‘pillar of stability’

According to US ambassador to Athens Geoffrey Pyatt, Washington sees Greece as “a critical pillar of regional stability.” “The prime minister’s engagements in Washington will provide a critical opportunity to inform investors and policymakers of the opportunities that the new Greece has to offer,” Pyatt told a conference in early December.

According to a senior US official, there was a “reframing of the US-Greece relationship” even from the first half of 2017 under Tsipras, with Greece emerging as “one of the United States’ most important partners in southern Europe.” Tsipras, who tempered the deep-seated anti-Americanism of his Syriza party with pragmatism, scored points by ending a quarter-century name dispute with neighbouring North Macedonia, and by promoting an energy agenda aligned with US interests at the expense of Russia.

Under Tsipras, Athens also signed on to an F-16 upgrade programme worth $1.5 billion. In October, a team headed by US Secretary of State Mike Pompeo signed defence and security upgrade agreements. Athens is also interested in US-made drones and, eventually, F-35 warplanes, Mitsotakis told To Vima. “We’ve gotten past the era of instinctive or reflexive anti-Americanism,” the US official said, referring to scepticism by many Greeks towards Washington for backing the 1967 Greek military junta.

The trip to the White House -- six months to the day after his electoral victory -- will be the first as prime minister for Mitsotakis, who studied at Harvard University. He saw Trump in London during the NATO summit in early December.

“One of the open questions about the Mitsotakis visit is whether he can convince Trump to follow a much more strategic and effective policy to limit the substantial damage Erdogan has caused Greece, the US and the NATO Alliance,” says Nicholas Burns, former US Ambassador to Greece, currently diplomacy professor at the Harvard Kennedy School.

“President Trump has been weak and inconsistent in responding to Turkey’s purchase of the Russian A-400 air defence system and Turkey’s cavalier disregard of American interests in Syria,” Burns said.

Mother, daughter raped inside their house in UAE