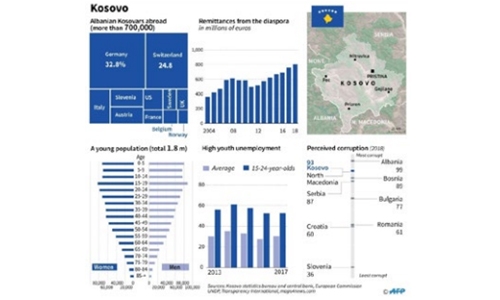 Kosovo went to the polls yesterday in an election that could usher in new leadership at a time when stalled talks with former war foe Serbia are a source of instability in Europe. Whoever takes the reins will be under heavy pressure from the West to renew dialogue with Belgrade, which still rejects the independence its former province declared in 2008.

However, for many of Kosovo’s 1.8 million citizens, high unemployment, widespread corruption and poor healthcare are more pressing concerns than the talks. “We need freedom, a state governed by the rule of law, prosperity, economic development,” voter Mentor Nimani, 47, told AFP in the capital Pristina shortly after polling began at 0500 GMT.

For the past decade Kosovo has been dominated by members of the guerrilla forces who waged an insurgency against Serbian repression in the late 1990s -- a war that cost 13,000 lives, mostly Kosovo Albanians. Yesterday’s snap poll was called after then prime minister Ramush Haradinaj resigned in July to face questioning by a special court in The Hague investigating war crimes from that era.

Opposition parties hope to block him and other ex-fighters from regaining power by harnessing public frustration with the graft and poverty that have blighted Kosovo’s first decade of independence. Brussels and Washington will be watching closely to see whether a change of power can thaw the frozen dialogue and ease tensions.