Reporters jailed in Myanmar | THE DAILY TRIBUNE | KINGDOM OF BAHRAIN 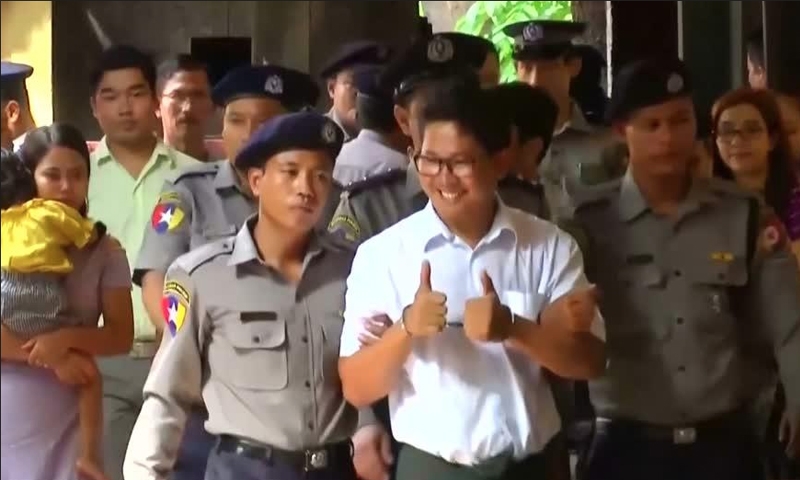 Yangon : Two Reuters journalists accused of breaching Myanmar’s state secrets law while reporting on a massacre of Rohingya Muslims were jailed for seven years yesterday, fuelling international outrage a week after the army was accused of genocide. Wa Lone, 32, and Kyaw Soe Oo, 28, who have been held in Yangon’s Insein prison since their arrest in December, were charged with violating the Official Secrets Act, a draconian British colonial-era law which carries a maximum sentence of 14 years.

The case, which sparked an international outcry, was seen as an attempt to muzzle reporting on last year’s crackdown by Myanmar’s security forces on the Muslim Rohingya minority in Rakhine state. Army-led “clearance operations” drove 700,000 Rohingya into Bangladesh, carrying with them widespread accounts of atrocities -- rape, murder and arson -- by Myanmar police and troops.

The reporters denied the secrets charges, insisting they were set up while exposing the extrajudicial killing of 10 Rohingya Muslims in the Rakhine village of Inn Din in September last year. They had told the court they were arrested after being invited to dinner by police in Yangon, who handed them documents. As they left the restaurant, the pair were detained for possessing classified material. But Judge Ye Lwin was unmoved, also choosing to disregard a whistleblowing policeman’s testimony that corroborated their version of events.

“The culprits intended to harm the interests of the state. And so they have been found guilty under the state secrets act,” he told the packed Yangon court. “They are sentenced to seven years in prison each,” he said.

Venezuelan refugees are miserable. Let’s help them out

Eight civilians killed in Iraq in IS attacks