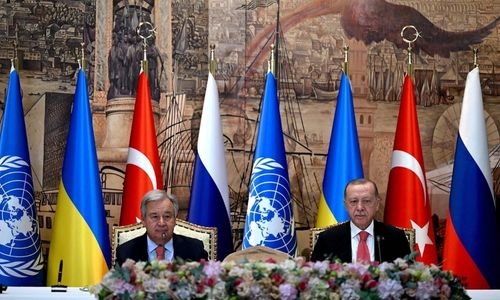 One of the sessions held yesterday as part of the Manama Dialogue highlighted the global micro-diplomatic success, especially in light of the ongoing Russia-Ukraine crisis.

Micro-diplomacy consists of the set of diplomatic initiatives pursued by non-super powers or parties involved in a conflict, or non-state actors to find solutions to issues that are capable of creating a global crisis if aggravated.

Pekka Haavisto, Minister of Foreign Affairs of the Republic of Finland, spoke on the subject followed by  ISS Director-General and Chief Executive Dr John Chipman.

“We really appreciate the efforts of the Turkish government to ensure a non-stop flow of food grains from the conflict region.

A great job was also done by the International Atomic Energy Agency to ensure the nuclear safety process.

“Saudi Arabia, indeed, did a great job by forging an agreement to ensure the exchange of prisoners between both nations.”

Kyiv and Moscow in July 2022, five months after the breakout of the war, signed landmark agreements with Turkey and the United Nations that will free up Ukrainian Black Sea ports and clear the way for exporting millions of tons of desperately needed Ukrainian grain, as well as Russian grain and fertiliser.

Brokered by Turkey and the UN, the major breakthrough marks the first step to ending a standoff that threatens world food security and will ease the looming global food crisis while the two countries are at war in Ukraine.

The signing of the deal in Istanbul was overseen by President Recep Tayyip Erdoğan – a key player in the negotiations who has good relations with both Moscow and Kyiv – and UN Secretary-General Antonio Guterres.

Russia and Ukraine have swapped hundreds of prisoners in a deal mediated by Saudi Arabia, another case of micro-diplomatic success.