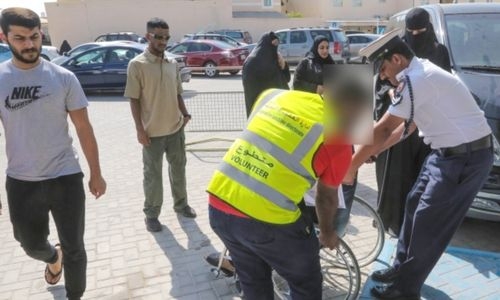 Close to 100 beneficiaries of the alternative sentence scheme yesterday did a ‘marvellous volunteering act’ by contributing towards the Kingdom’s democratic strides.

They were seen controlling the traffic outside polling booths, guiding voters to the voting area as well as helping the elderly cast their votes, while wearing fluorescent green jackets carrying ‘Volunteer’ and ‘Alternative Sanctions Directorate’ on them.

Speaking to The Daily Tribune, a community police officer on election duty, on grounds of anonymity, said these volunteers were doing a brilliant job.

“I can’t reveal more details. All I could say is that they are doing a brilliant job and their contribution to this democratic process is something really appreciable.”

The ’volunteers’ could not speak to The Daily Tribune as they said ’they are not supposed to speak to the media’.

Many legal luminaries and political scientists in the region have praised the Kingdom’s adoption of alternative penal code, describing the move as an important practice to be emulated at the level of Arab countries and the countries of the region.

National Institute of Human Rights (NIHR) Chairman Ali Al Derazi earlier noted that more than 4,000 people have benefited from the law since its adoption four years ago.

The Ministry of Justice, Islamic Affairs and Endowments has initiated a new scheme titled “Recovery Programme” for those who have been awarded alternative sentences.

The new programme comprises rehabilitation and training initiatives to those, who have received alternative penalties.

As per the ministry initiative, the Undersecretary for Justice and Islamic Affairs must implement the provisions of the decision and it shall come into force from the day following the date of its publication in the Official Gazette.

Until now, 4,188 inmates have benefitted from the Alternative Sentencing Law, which was introduced in the year 2018.

According to Public Prosecution, the substitution of sentences of imprisonment with alternative sentences follows a judicial process after reviewing the individual, social and economic circumstances of each case, following formal referral by the Verdicts Implementation Directorate of the Interior Ministry.

All cases were each considered carefully by the relevant judge, and all have had sentences of imprisonment replaced with various types of alternative penalties appropriate to the individual circumstances of each inmate and their case, according to Public Prosecution.

The Verdicts Implementation Directorate has always highlighted that the decree law mentions alternative sentencing as an important tool in the rehabilitation of inmates and their reintegration into society.

A number of Parliamentarians have hailed the humanitarian gesture of His Majesty King Hamad bin Isa Al Khalifa for the recent special pardon and the release of 160 inmates after they served a period of punishments issued against them.

Sixty-nine inmates recently became the beneficiary of Alternative Penalty Law, which is a landmark humanitarian initiative in the Kingdom.