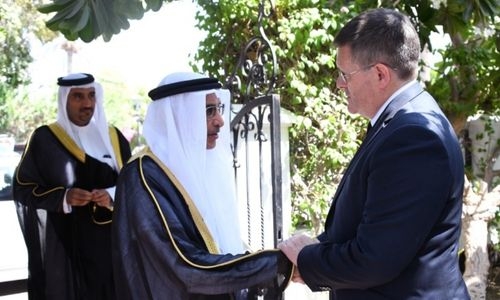 Deputy Prime Minister and Minister of Infrastructure, Shaikh Khalid bin Abdullah Al Khalifa, said that with the passing of Her Majesty Queen Elizabeth II, the world has lost a prominent personality who devoted her efforts to the service of her nation and people. The Deputy Prime Minister and Minister of Infrastructure stressed solid historical ties binding the Kingdom of Bahrain and the UK on the basis of friendship and respect. He was speaking during a visit yesterday to the residence of British Ambassador to the Kingdom of Bahrain, Roddy Drummond, to offer condolences over the passing of HM Queen Elizabeth II.

He was accompanied by Minister of Cabinet Affairs, Hamad bin Faisal Al Maliki. The Deputy Prime Minister and Minister of Infrastructure offered deep-felt condolences to the British monarch, government and people, recalling the contributions of HM Queen Elizabeth II to promoting the values of humaneness, tolerance and harmony. He pointed out that the great official and popular interaction that accompanied the news of Her Majesty’s death reflected her high stature, respect and appreciation at the international level.

The Deputy Prime Minister also expressed his sincere wishes for the UK, under the leadership of His Majesty King Charles III of the United Kingdom of Great Britain and Northern Ireland, Head of the Commonwealth, to continue the march of progress and prosperity.

The British Ambassador expressed his thanks and appreciation to the Deputy Prime Minister and Minister of Infrastructure for the good feelings he showed towards HM Queen Elizabeth II, stressing that the longstanding bilateral relations, which extend for over two centuries, will contribute to more cooperation and coordination between the two friendly countries.