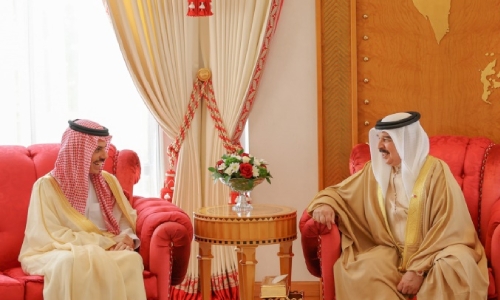 The Saudi Foreign Minister is on a visit to the kingdom to chair his country’s side in the Political Coordination Committee emanating from the Saudi-Bahraini Coordination Council.

HM King Hamad welcomed the Saudi Foreign Affairs Minister and requested him to convey his greetings to the Saudi Monarch and Crown Prince, as well as his wishes of abundant health and wellness to King Salman and for further progress and prosperity to the brotherly Saudi people.

HM the King expressed pride in the deep-rooted solid Bahraini-Saudi relations, and the steady progress of bilateral cooperation in all fields, commending the leading role played by Saudi Arabia, under the leadership of King Salman, in serving the issues of the Gulf Cooperation Council (GCC), Arab and Islamic countries.

The Saudi Foreign Affairs Minister expressed sincere thanks and appreciation to HM the King for the warm welcome and hospitality accorded to him.

He also expressed pride in the efforts being exerted by HM King Hamad to strengthen the fraternal Bahraini-Saudi relations.