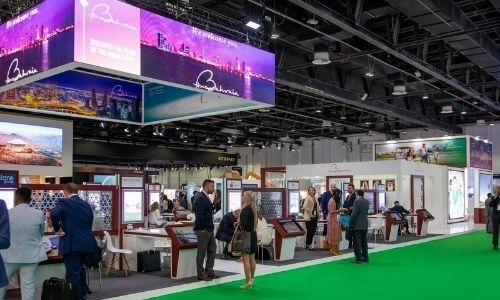 This year Bahrain recorded a significant and successful presence in the Arabian Travel Market 2022 exhibition in Dubai, through Bahraini national pavilion, announced through the Bahrain Tourism and Exhibition Authority (BTEA). The pavilion which was one of the largest of its kind among the 158 pavilions that took part in this international tourism event, which wrapped up on Thursday.

The pavilion had 21 exhibitors, led by national air carrier Gulf Air, as well as several of the most well-known Bahraini tourist facilities, including hotels, resorts, tourism companies, and tour operators.
Mrs. Fatima Al Serafi, Deputy Chief Executive Officer of BTEA, expressed her pride in Bahrain's successful participation in the Arabian Travel Market 2022, which was the result of all participants' harmonized efforts to bring Bahrain's tourism sector to the world's attention and to showcase its privileges relying on civilization, diversity, heritage, and modernity.

“ATM 2022 provided an excellent opportunity to strengthen relationships with tourism sector partners in the region and around the world, as well as to form new partnerships, with the goal of attracting more tourists and visitors to Bahrain, along with supporting the tourism sector's recovery plans following the challenges of the previous two years, and discovering new opportunities for success and growth,” according to Mrs. Al Serafi.

Several high-level meetings were held during the exhibition by the Bahraini delegation, led by Mrs. Al Serafi, including those with the CEO of the Saudi Tourism Authority, Mr. Fahd Hamidaddin, Mr. Issam Kazim, CEO, Dubai Corporation for Tourism and Commerce Marketing, and Mr. Azzan bin Qassim bin Mohammed Al-Busaidi, the Undersecretary for Tourism at Oman's Ministry of Heritage and Tourism. Joint visions and action plans for promoting tourism in the region were agreed upon during these meetings.

Meetings were also conducted with several tour companies who have signed cooperation agreements with BTEA. Strategies to activate promotional campaigns in several regions this summer were addressed at these meetings, with plans to launch these campaigns in markets such as Spain, Italy, India, Israel, and Russia in the next month.

The Bahraini tourism facilities in the pavilion also had successful work sessions with their regional and international counterparts, where they discussed joint cooperation in boosting business and attracting more visitors to Bahrain. Mrs. Al-Serafy also spoke on a panel discussion entitled "Building a Sustainable Business Itinerary," which examined BTEA's initiatives in the field of sustainable tourism.

Ms. Maryam Toorani, BTEA’s Director of Marketing and Promotions, also highlighted Bahrain's accomplishments in the field of tourism gender equality at a panel discussion entitled "Enhancing women's presence in the tourism business". It’s noteworthy that the Bahraini pavilion attracted over 20,000 visitors this year. During the four-day exhibition, opportunities for cooperation and partnership between the participating Bahraini entities and nearly 1,500 participating companies were reviewed.