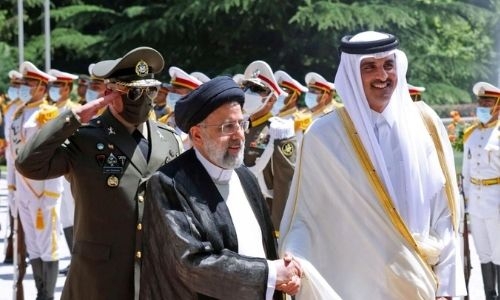 Qatar's ruler met Iranian President Ebrahim Raisi in Tehran on Thursday, state television reported, as talks faltered on bringing Washington back into a 2015 nuclear deal between Tehran and major powers.

The emir has called for more dialogue to settle the standoff. Washington unilaterally abandoned the nuclear deal under then-president Donald Trump in 2018 and reimposed economic sanctions.President Joe Biden has said he wants the United States to return to the agreement but on-off talks on the mechanics have been stalled since March.

Iran's state news agency IRNA said "unfreezing assets, cooperation in holding the 2022 World Cup, prisoner exchanges and cooperation in the field of energy" were also on the agenda of the emir's visit. Iran has expressed interest in hosting spectators for the World Cup finals in Qatar in November on its nearby resort island of Kish. It is waiving visa fees for visitors in the hope of attracting fans to the island.

Ranil Wickremesinghe sworn in as Prime Minister of Sri Lanka