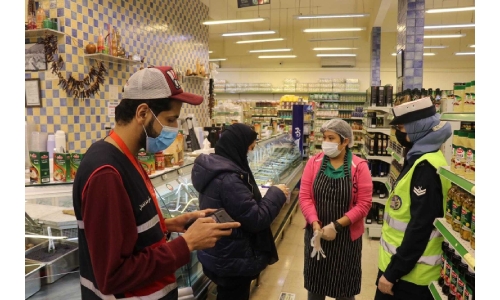 The violators will be deported after legal procedures are completed.

This came as the Nationality, Passports and Residence Affairs (NPRA) organised an inspection campaign covering shops in the Capital Governorate.

Carried out in cooperation with LMRA and the Capital Governorate Police Directorate, the initiative was aimed at inspecting Commercial Registers (CRs) that exploit NPRA’s facilities.

LMRA Labour Inspections Director Hamad Faisal Al Mulla said that the campaign was part of ongoing government efforts to develop the work environment by fighting practices that could risk the labour market’s competitiveness, justice, and flexibility.

It was part of ongoing joint inspections to ensure the compliance of workers with the residency rules and LMRA law to tackle law-breaking activities.

The Director of Search and Follow Up, Col, Talal Nabil, asserted the dedication of the NPRA to intensify joint inspections in cooperation with government authorities to tackle violations of illegal workers.

He said that the NPRA would also continue visiting various CRs in all governorates.

The Director highlighted the significant role of members of society in supporting government efforts to stop illegal practices.