Exports of national products jump 75%, deficit down 71% | THE DAILY TRIBUNE | KINGDOM OF BAHRAIN 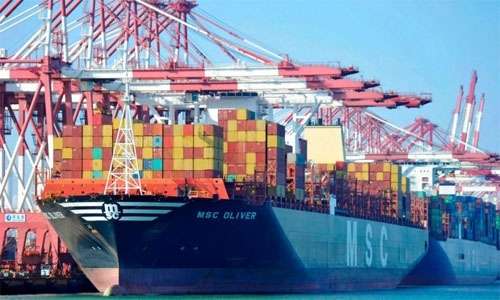 Exports of made-in Bahrain products during the second quarter of 2021 jumped 75%, led mainly by robust demand for agglomerated iron ores and concentrates from Saudi Arabia, UAE and other countries, indicating the revival of manufacturing activities, despite the COVID-19 outbreak.

Imports also grew by 7%, signifying a recovery in domestic demand, during the second quarter, leading to the narrowing of the trade deficit, compared to a year ago. According to the Information & eGovernment Authority foreign trade data, exports of national origin products surged 75% to BD943 million from BD540 m in the same quarter a year ago.

Saudi Arabia topped the buyers’ list of made-in-Bahrain products with BD167 million. Closely following was the United Arab Emirates with BD127m and the United States of America with BD88 million.

The top 10 countries buying from Bahrain accounted for 71% of the total value, with the remaining countries accounting for 29%. The total value of agglomerated iron ores and concentrates, the top products exported during the second quarter, amounted to BD251 million.

On the second spot was unwrought aluminium alloys with a value of BD201 million, and semi-finished iron and steel third with BD53 million. 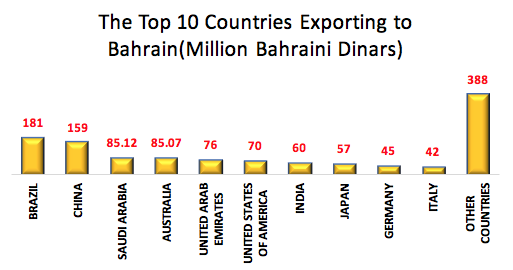 Value of imports rose by 7% to reach BD1.249 billion compared to BD1.168 billion in the same quarter of the previous year. Brazil topped the list with BD181m, followed by China with BD159m and Saudi Arabia with BD85 million.

From these countries, Bahrain bought non-agglomerated iron ores and concentrates for BD224m, Aluminum oxide for BD79m and four-wheel drive cars for BD41m. Here also top 10 import partners account for 68% of the total imports. The rest of the countries accounts for 31% of imports. 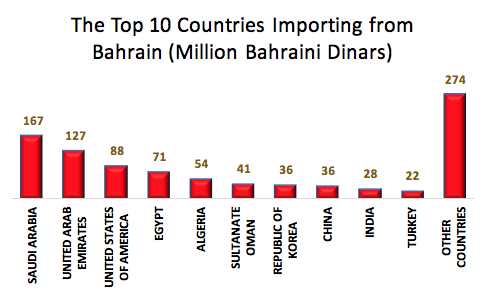 Four-wheel drive cars emerged as the top products re-exported from Bahrain during the second quarter.

Bahrain also re-exported BD19 m worth of gold ingots and BD14m worth parts of aircraft engines. Quarterly re-exports rose by 15% to BD164m from BD143m in the year-ago quarter. 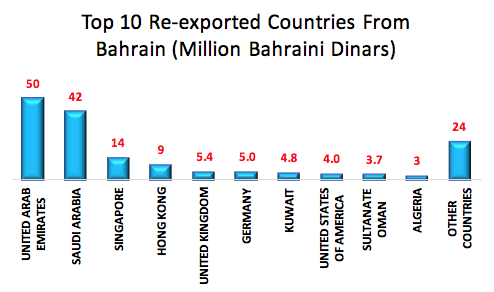 The trade balance, the difference between exports and imports, recorded a deficit totalling BD141 m during second quarter 2021, compared to BD485 m for the same quarter of the previous year, a 71% improvement.