Bahrain on the path to recovery, says HM King | THE DAILY TRIBUNE | KINGDOM OF BAHRAIN 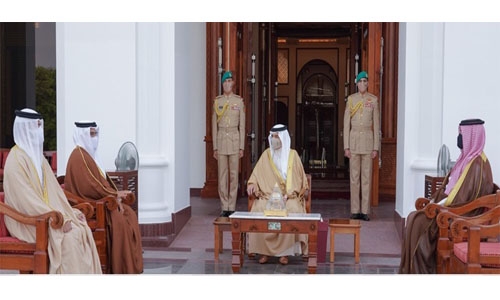 Bahrain on the path to recovery, says HM King

The health situation is reassuring, and Bahrain is well on its path to recovery, said His Majesty King Hamad bin Isa Al Khalifa yesterday, who also thanked the citizens and residents of Bahrain for their commitment to the national vaccination drive.

Their highnesses reviewed several issues, foremost being the latest developments in battling the COVID-19 outbreak. King Hamad praised the diligent works of the Bahrain team, led by HRH the Crown Prince, in addressing the pandemic and affirmed that the measures are proving vital to reducing the caseload of infections.

HM King praised the role played by the medical and health team and all frontline workers and support agencies, stressing that their noble humanitarian efforts are a source of pride and appreciation for everyone.

King Hamad called on all to continue working with determination and perseverance to ensure peace and safety for all in the Kingdom.