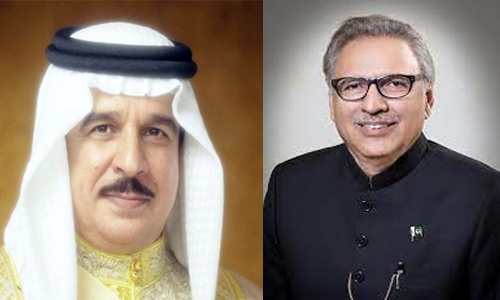 His Majesty King Hamad bin Isa Al Khalifa sent a cable of condolences to the President of Pakistan Arif Alvi following the tragic loss of life in the train collision in the Ghotki district of Sindh province.

HM King Hamad offered his condolences to President Alvi, the victims' families and the people of Pakistan, praying to God Almighty to rest the deceased in eternal peace, to grant the injured speedy recovery and to protect Pakistan from harm.

The death count in Monday's train collision in Pakistan's Sindh province rose to 62 on Tuesday, according to media reports, even as the Opposition parties demanded an immediate probe into the reasons for one of the country's worst train accidents.

At least 62 people were killed and over 100 others injured in the twin accidents between Reti and Daharki railway stations where eight carriages of Millat Express derailed just before Sir Syed Express rammed into them near Dharki, a city located in the Ghotki district of upper Sindh early Monday morning.

The rescue operation was completed and the track has been cleared after retrieving 17 coaches that had been damaged by the crash and the engine of the train, Geo News quoted as saying Divisional Superintendent, Railway Sukkur Tariq Latif.

"The up and down track has been restored. We have received orders to resume train service," he said.

According to ARY News, the death count in the Ghotki train accident has surged to 62 while more than 100 persons sustained injuries.

Minister for Railways Azam Swati said if his resignation meant the dead can come back to life, he was ready to do so even as he promised a comprehensive inquiry.

He said that train tracks in the Sukkur Division were in poor condition.

"We have to find out now who is responsible for this accident," he said.

The deadly accident occurred when the Sir Syed Express headed from Rawalpindi to Karachi, coming from the other direction, smashed into derailed coaches of the first train in the adjacent track, a spokesperson of Pakistan Railways said.

"The driver tried to apply emergency brakes but the locomotive hit the infringing coaches," the railways said in an initial report.

Rescuing trapped passengers was a "challenge" for the rescue officials who had to employ heavy machinery to free people. The efforts were hampered by a lack of appropriate cutters.

He said that ever since the government of Prime Minister Imran Khan came into power in 2018, train tragedies have become more frequent, while government's ministers are busy doing politics over them.

Other Opposition parties, including the Pakistan Muslim League-Nawaz (PML-N) and Jamiat Ulema-e-Islam-Fazl (JUI-F) on Monday, demanded a parliamentary debate over the accident.

The convener of the standing committee's sub-committee on railways, Ramesh Lal, and MQM's Sabir Hussain Kaim Khani admitted that the railway's authorities failed to take timely action in spite of being repeatedly apprised of the poor train safety.

Train accidents are common in Pakistan and dozens of people lose their lives every year. The railways have seen decades of decline due to graft, mismanagement and lack of investment.

According to a senior former railways official, such accidents happen from time to time all over Pakistan as the railway's network remains outdated in many places.

"In some areas, they are still using the same network and tracks which were laid before the Partition," one former official said.

In July 2020, at least 20 people were killed when the Shah Hussain Express train rammed into a coaster near Sheikhupura in Punjab.

Around 30 people were travelling on the vehicle from Nankana Sahib to Peshawar, out of whom 13 males and seven females died in the accident. The dead included 19 Sikh pilgrims and the driver of the vehicle.

This incident came four months after a bus crossing an unmanned railway crossing near Rohri in Sindh was crushed by the Lahore-bound Pakistan Express train coming from Karachi on February 28, 2020, killing at least 19 people and leaving more than 30 injured.