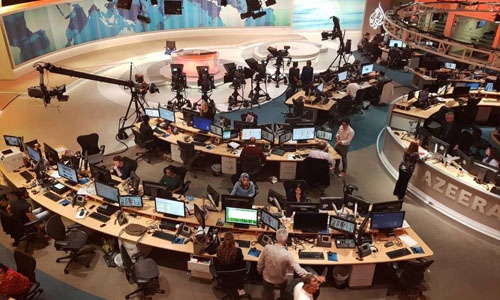 The Police Media Centre at the Interior Ministry has, over the past days, noticed some inciting news reports broadcast by the Qatari government-sponsored Al Jazeera Channel. The statements quote European Parliamentarians alleging their concern over the human rights situation at the Reformation and Rehabilitation Centre in "Jau" and demanding the release of specific names, claiming they are "prisoners of opinion".

The Interior Ministry affirmed that the incitement campaign of the Qatari channel through the support of their owners is an aggressive campaign against Bahrain and has nothing to do with slogans the channel uses for "media consumption".

Following these campaigns, the Interior Ministry issued a statement in which it clarified the following:

“First: The Police Media, through its observation, has almost confirmed the systematic approach of the Qatari government-owned Al Jazeera Channel as the main party. Another party is individuals who run alleged human rights organisations while they are convicts and escaping from justice, and some of them involved in terrorist cases.

“Second: The organised approach includes some parliamentarians from European countries announcing wrong human rights information about Bahrain. Al Jazeera airs the statements immediately to target the accomplishments of Bahrain, without consideration to the extraordinary global situation because of the COVID-19 pandemic.

“Third: The initial analysis affirms that the released statements of individuals who lack information about the human rights situation in Bahrain. They are also unaware of the professional precautionary measures and procedures at the Reformation and Rehabilitation Centre to protect the health and safety of all inmates regardless of the length of their sentences. They are, first and foremost, a trust that must be protected.

“Fourth: Some European parliamentarians who release statements about human rights in Bahrain ignore the situations of thousands of inmates in their countries that are supposed to have achieved a decent level of human rights protection development. At the same time, most of their prisons witness alarming COVID-19 outbreaks.

“Fifth: The Kingdom of Bahrain has provided COVID-19 vaccinations for all citizens and residents, and it almost succeeded in vaccinating half the population is a remarkable health milestone. The optional vaccine was offered for free for inmates, and 100% of those registered have been vaccinated.

“Sixth: There are no COVID-19 active cases at the Reformation and Rehabilitation Centre. There are pre-arranged protocol and procedures to deal with future infections.

“Seventh: The Reformation and Rehabilitation Centre is open for human rights organisations, including the National Institute for Human Rights, the independent Office of the Ombudsman and Prisoners and Detainees Rights Commission. These institutions organise announced and unannounced visits to ensure that inmates receive services stated in the Reformation and Rehabilitation Organisations Law and its rules.

“Eighth: Facts deny the alleged media neutrality of the Qatari Al Jazeera Channel. Its media policy targets others and their accomplishments while it does not discuss anything related to Qatari Affairs.

“Finally: The coordinated inciting campaign between Al Jazeera and its supporters won't affect Bahrain and its people and leadership. May God protect Bahrain from Sedition promoters.”

Tons of fish found dead on banks of Lebanese lake

Batelco is Making Bahrain the Most Connected Island in the World