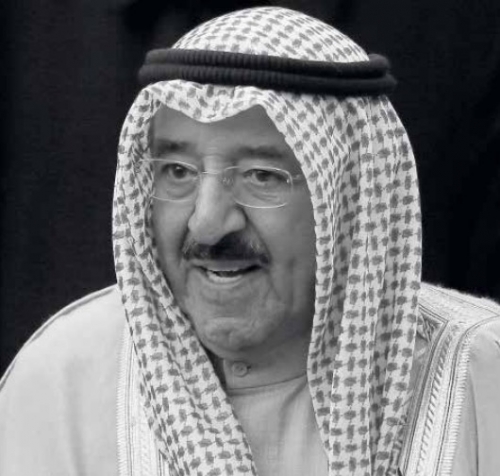 Bahrain expressed deep sorrow over the death yesterday of the Emir of Kuwait, His Highness Shaikh Sabah Al Ahmed Al Jabir Al Sabah. Upon the order of His Majesty King Hamad bin Isa Al Khalifa, official mourning was announced and flags will be flown at half-mast in the Kingdom for three days.

They paid homage to the deceased, hailing his legacy, achievements and endeavors exerted to best serve his country, the Arab and Islamic nations, and the world. The Royal Court, upon an order from His Majesty King Hamad, mourned the late Amir. “He was a wise leader who devoted his life to serving his people and nation and serving humanity.

We express our sincere condolences to our brothers, the honorable Al Sabah family and the dear people of Kuwait,” the statement said. HRH the Premier, in a statement, said the Arab and Islamic nations lost, with his death, a wise leader who spearheaded his country’s development and progress, contributed to strengthening the march of the Gulf Cooperation Council (GCC), and strongly advocated Arab rights and supported efforts to maintain regional security and stability.

HRH the Crown Prince extended his deepest condolences to the people of Kuwait, noting his exemplary humanitarian leadership and noble endeavors. Other leaders in the Kingdom also extended sincere condolences and heartfelt sympathy to Kuwait.

The Shura Council, in a statement, said the Amir of Kuwait left behind a prolific legacy of landmark achievements for the sake of his country, the Arab and Islamic nations. “The Arab and Islamic nations have lost a sincere man who gave much to his country and was able, with his wisdom and statesmanship, to rank his country among developed nations and enhance its international standing, earning the respect the entire international community,” it said.

“The Arab and Islamic nations have lost a charismatic leader, and prominent advocate of peace, co-existence and tolerance,” she said, hailing his decades-long endeavor to support Arabian Gulf unity and bolster pan-Arab solidarity.