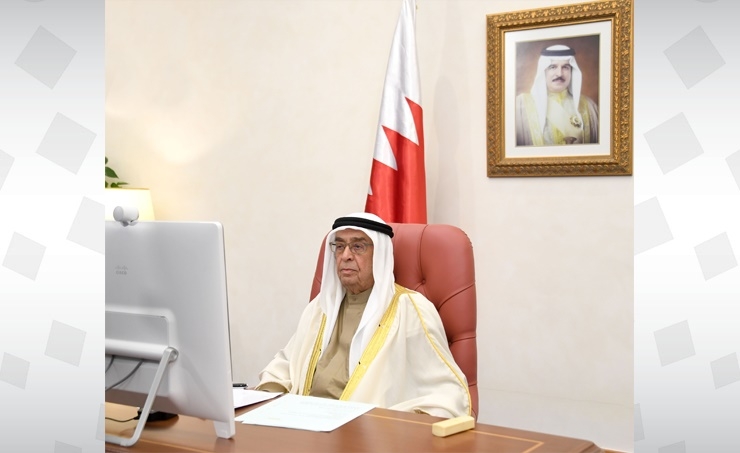 A proactive global strategy must be developed to monitor epidemics, pandemics and disasters in order to respond to them as they occur or as quickly and as ably as possible.

This was recommended by Deputy Prime Minister His Highness Shaikh Mohammed bin Mubarak Al Khalifa, who participated in a virtual summit of the Non-Aligned Movement (NAM) on behalf of His Majesty King Hamad bin Isa Al Khalifa.

The meeting, called by Azerbaijan President Ilham Aliyev, who is the chair of the current session of NAM, was held under the theme of “United Against COVID-19” and discussed responses to the ongoing pandemic crisis.

HH Shaikh Mohammed proposed a number of recommendations that Bahrain believes might contribute to supporting efforts against such crises, both in the present and the future.

The Deputy Premier added that strengthening scientific research centres for peaceful purposes within a collective and international framework, supported by the transparency of work and clarity of goals, is also essential.

This will help them immunise themselves against epidemics and diseases, particularly those that are infectious and widespread. At the same time, it would help provide food and medicine to countries in need of such assistance.

The Deputy Premier further noted the importance of supporting the World Health Organisation and its efforts to fulfil its role and goals in the service of all humanity. Also during the virtual summit, HH Shaikh Mohammed conveyed the greetings of HM the King to President Aliyev and to the heads of participating delegations, wishing them success.

The Deputy Premier referred to the conditions in which the summit is being held as extremely dangerous and unprecedented in modern history. He said the pandemic does not spare any country or people and it has caused severe human, economic and social damage.

Bahrain’s participation in the summit is a confirmation of its support for the goals and principles of the NAM to protect the security and safety of the world from all dangers and disasters, he added.

HH Shaikh Mohammed said that Bahrain, since the outbreak of the virus and being aware of its national responsibilities, undertook under the guidance of HM the King proactive efforts and measures to confront the epidemic.

The Kingdom was able, through its precautionary and preventive measures, to contain the virus thanks to the speedy detection of affected cases and their contacts, and thanks to the intensification of awareness campaigns, which have contributed to mitigating its spread and limiting the number of its victims, HH Shaikh Mohammed said.

The strenuous efforts made by Bahrain’s National Taskforce Combatting COVID-19, as well as those of volunteers, have had a great role in responding effectively to the virus within a framework of transparency.

Comprehensive free medical care is also provided to citizens and residents alike. Bahrain is ready to share the experiences of its success that was praised by the WHO and other countries around the world, he added.